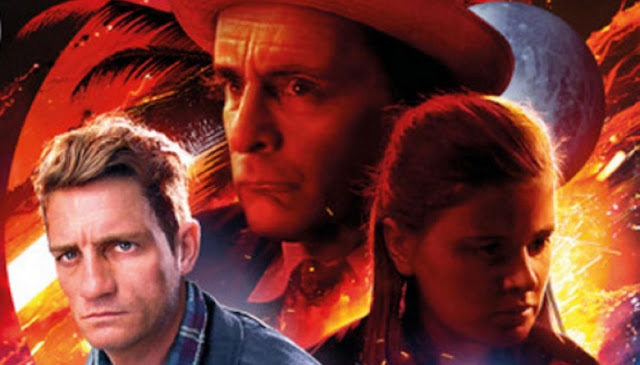 Shadow Planet features not only the Seventh Doctor and Ace but also the return of beloved audio companion, Hex! The story obviously takes place during his early days on the TARDIS with his flirtatious relationship with Ace still in full swing. Author, AK Benedict wastes no time with this story in delving into a philosophical debate concerning the main characters but sadly doesn't go far enough.

The TARDIS lands on the planet Unity, where scientists there claim to offer a unique service, they can separate your dark side so you can reconcile with the darker sides of your own personality. Of course, the technology they are using is hurting the planet, which is also psychic and things are starting to go wrong and the Doctor, Ace and Hex must stop it. There really isn't much to this plot and the Doctor just talks to the planet to save the day!

But thinking back on it, Shadow Planet isn't about its own plot, it is about the fact that everyone has a side they don't talk about and on Unity this can be manifested in robotic form. More importantly though, your shadow self isn't always evil, take Ace for example, her shadow self mostly wants to be left alone with her own thoughts. The company also extracts the shadow selves from their workers and keeps them imprisoned. Even the leader, Wheeler isn't immune, though one can see the revelation surrounding her character isn't hard to see coming.

While the script is clever enough not to make the shadow selves completely evil, it doesn't do much to further the exploration of its main characters. Hex's shadow nihilism is interesting but is overcome too quickly and we don't see the 'real' Hex or Ace acting any differently. And while it isn't surprising that this incarnation of the Seventh Doctor isn't at one with his shadow self, it is quite disappointing that we don't get to see anymore of his internal struggles. But the fact that I am engaging with this story on a level like this shows how strong an entry it is, especially for a release in the Monthly Range. Shadow Planet is certainly interesting and thought provoking enough to keep anyone interested.

We also get Scott Handcock's World Apart, a story which also takes part on a bizarre alien world but whose features are very different to that which came before. The TARDIS nearly collides with the planet, Nirvana and is forced to perform an emergency materialisation, leading to the crew exploring their new surroundings. Disaster quickly follows and Hex and Ace find themselves separated from the Doctor and the TARDIS. That is the cliff hanger, the entirety of the first episode is just the TARDIS crew exploring their surroundings, with a slow realisation as to what is going on.

We spend much of the second episode with just Ace and Hex as they struggle to survive so that the Doctor can eventually save them. Personally, I love story that take their time to build themselves up and Scott Handcock really delivers here, building both atmosphere and tension with the pair's plight.

For me though, the characterisation was a little confusing. Hex is back to being his flirty self, even though he wasn't in the previous story and Ace feels like she has walked out of the TARDIS not long after Dragonfire. The situation the pair are in certainly doesn't help, you can't expect two characters to have to spend each night sleeping with each other for body warmth not to develop some sort of unrequited love?!

Luckily Handcock nails the Seventh Doctor, giving us a nice long look as his alien morality and in using Hex as a mirror, it allows us to see why he might sometimes seem monstrous, even when he is trying to help.

But I really like World Apart, even more than Shadow Planet and while neither story is perfect, they are both smart and interesting enough to linger in the memory for a while. If more stories could aspire to be like these, I would really be thrilled...