Doctor Who: The Movellan Grave - Review 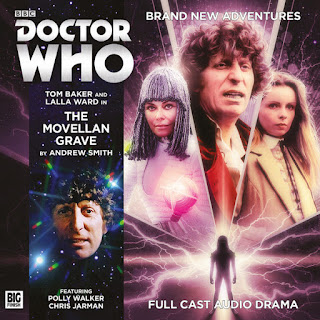 The Movellan Grave kicks off the first of two offerings from Andrew Smith in July and this story returns him to his roots. Writing for the series eighteen line up, as you will expect, he has got a real handle on the relationship between the Doctor and Romana. He gives a lot of respect to what has happened before while paying tribute to the development of the companions in the worlds of Big Finish.

The pair get separated from each other for large segments of the story as each discovers various relevant facts, relating to the Movellan's presence on Earth.

You certainly don't need to have seen Destiny of the Daleks to enjoy this story, all the necessary information is supplied. If you do know the relevant information, you'll be surprised that this is rather better than what we got in Destiny. Smith extrapolates the information given about the Movellan's in that story, giving us some further insight into their society, without making the whole story about them.

Director Nicholas Briggs keeps moving things at a rattling pace, the locations in this story are far apart and there is sufficient time given for the characters to travel from A to B, something that does occasionally get overlooked.

We also have some strong performances from guest stars, Polly Walker, Chris Jarman and Camilla Power. Jamie Robertson's sound design and music help to sell the scale of the events as they unfold. And there is a member of the archaeological dig named after a certain script editor!

This is one of those stories that slots so well into its place in Doctor Who chronology that once you've heard it, you'll think it has always been there...