Doctor Who: The Haunting of Malkin Place - Review 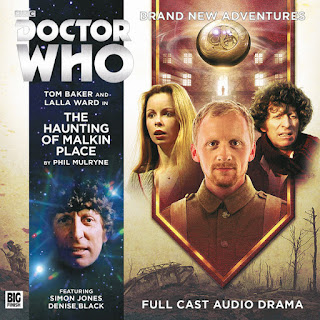 While visiting the birthplace of Henry James, a chance encounter with a spiritualist on a train, sends the Doctor and Romana on the trail of a ghost. It is the most convincing case that the spiritualist has ever heard of and it appears to be so on arrival.

The Doctor and Romana soon learn that things have a tendency to go bump in the night in Malkin Place, there is the laughter and cries of a unseen child. But surely there is a rational explanation?

But is science always the explanation for everything?

The Haunting of Malkin Place is Big Finish's answer to the creepy The Empty Child/The Doctor Dances. It is an ostensibly a supernatural homage. But in truth this story is a piece about PTSD, grief and renewal.

I particularly liked the supernatural occurrences which sounded brilliant on audio. The spectral children sounded particularly sinister. But I didn't feel in any way cheated by the real reason they were there as in typical Doctor Who fashion, the problem also presented the solution to the whole thing. I also didn't see the revelation with Mrs. Mountford coming, despite being a fan of The Others. As I am someone who enjoys fantasy and horror as much as I do science fiction, I appreciated this audio not only giving me my cake but it letting me eat it too. Perhaps my only gripe with this story was the gaping absence of K-9, not only could he have served as tonal contrast but also a look at service animals in war.

The chemistry between Tom Baker and Lalla Ward is on full display here and it is marvellous how the author, Phil Mulryne reflected both the actors viewpoints on the supernatural in their characters. It is just a shame that John Leeson couldn't have put in an appearance as K-9...