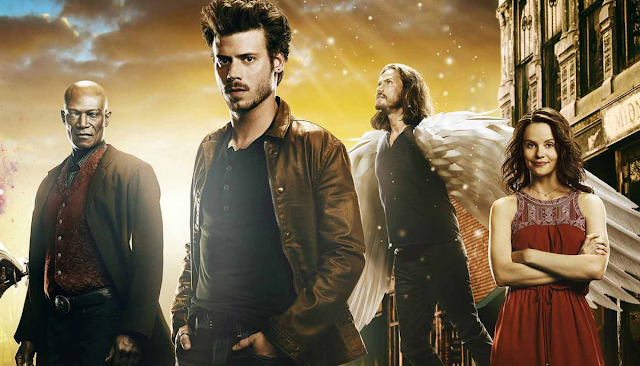 Manfred is a man with a problem. Well, a couple actually. He has a loan shark chasing him for money he doesn't have. But at least that problem is a living one and relatively self contained.

Following a séance which almost goes disastrously wrong and with the loan shark getting closer, Manfred flees and heads out into the small town of Midnight. Midnight is quiet, friendly and filled with secrets.

Oh and there are dead people.

Manfred had come to Midnight to hide. But he soon discovers that he is there to help.

Adapted from a series of novels from Charlaine Harris, the pilot episode of this new series takes delight in taking a new direction at every turn.

If anyone comes to this show expecting something like True Blood, then you'll be sorely disappointed. There isn't the sense of lumbering continuity or terrible choices that plagued the final seasons of that show. Instead, there is a fresh, lightness of touch and charm on a broad spectrum. This is a rural American gothic, with emphasis on rural and gothic and is immensely easy to watch.

It is nice to see the easy going nature of the locals begin to fade when the plot begins to move. In just the first episode we are given the background on not only Manfred but Lemuel Bridger, whose death kicked off the first book as well as ironing the ongoing plot and introducing us to the rest of the characters. Nothing in this episode feels forced or rushed, rather moments like Lemuel explaining what he is to Manfred set up an instant trust between the two characters. You really get the sense that everyone in Midnight sticks together and that this fact doesn't feel forced is refreshing too.

The series also boasts a splendid cast, Francois Arnaud is instantly charming as Manfred and seems the perfect fit, (and the fact that he is very easy on the eye helps too!). Sarah Ramos gives Creek the right combination between small town friendliness and a tough as steel force. Dylan Bruce gives Bobo the right air of amiable doof, with Paria Fitz-Henley being excellent as the slightly nervous but tightly wound town witch, Fiji.

Perhaps the standout performance comes from Peter Mansah as Lemuel Bridger, the town vampire. He is a character who is instantly memorable because of what he isn't. I think it is fair to say that Mansah is one of the best actors of his generation and instantly brings plenty of humour and humanity that sets him apart from the norm for a vampire. Sure, he is a vampire. Yes, he chooses not to kill. And yes, he is perfectly fine with that. He doesn't have any angst, no stress just a calm and caring leader of this little community who feeds of life energy.

It is the instant combination of the unexpected and the surprising that makes Midnight, Texas so much fun. Showrunner, Monica Qwusu-Breen has done a brilliant job of keeping the basics of what made the novels so good and expanding those elements. The handle on monsters and community and what happens when the first forms the second is fantastic.

This opening episode is brilliant throughout with a few little nice scares littered throughout for good measure. So if you're looking for a fun, smart supernatural adventure, this is a show for you.

Make a stop in Midnight, Manfred might regret it but I sure as hell won't...