Doctor Who: The Time Monster - Review 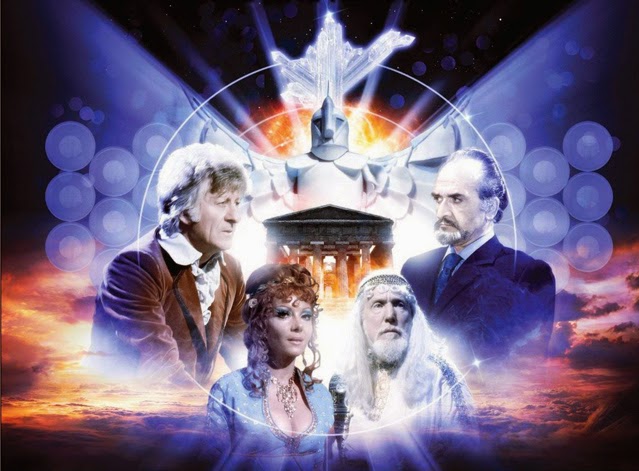 Watching The Time Monster, one can't help but feel there is something very Russell T. Davies about the whole thing. Like many of Davies' series finales, The Time Monster is epic which sees the Doctor's surrogate family with UNIT working together to stop the Master from trying to conquer the universe again, this time with the aid of Kronos, one of the mythical Chronovores. Unfortunately like so many of Davies' overblown finales, it is a mess of a story and is just remembered for the emotional scenes between the Doctor and his companion Jo more than anything else in particular.

The plot is just a blatant re-working of The Daemons, only with Satanism and paganism removed in favour of Greek Mythology and scientific bafflegab. Once again, the Master is trying to resurrect some ancient evil and use their technology and power to take over the cosmos. The creature in question is Kronos, a kind of person/pigeon hybrid, played by some bloke dangled from wires, flapping his arms like wings and generally looking like he is having a fit. Even if you suffered from pantophobia, you would never be afraid of this! 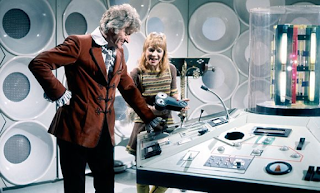 The final two episodes of the story feel like something else entirely. After nothing more than a filler episode with the Doctor and friends running too and fro while the Master gloats, the action shifts to ancient Atlantis. While the Master is getting to work seducing the Queen, played by Ingrid Pitt, the Doctor and Jo are thrown into a dungeon and later come face to face with a rather naff looking minotaur. At least in the proceedings the Doctor gets a chance to tell Jo a rather nice story about how he used to hang around with a reclusive hermit when he was younger.

More than anything else though, this story encapsulates everything that was both good and bad about the Pertwee era. In the form of Jon Pertwee, we've got a Doctor who is warm, friendly and fatherly but who is also insufferably arrogant and patronising. This is a man who constantly wants to reverse the polarity of the neutron flow. There are few companions who will ever be as good as Jo Grant. And the rest of the UNIT family are all together in what would prove to be their last story where they are all together. The Brigadier, Sgt. Benton and Captain Yates are all good chaps but it is a shame that they look like a real bunch of plonkers here.

And finally we have Roger Delgado's Master. He is as brilliant as ever, shamelessly stealing the entire story from under Pertwee's nose with as little effort as possible. But at the same time, his entire plan is a load of rubbish...