Doctor Who: The Silver Turk - Review 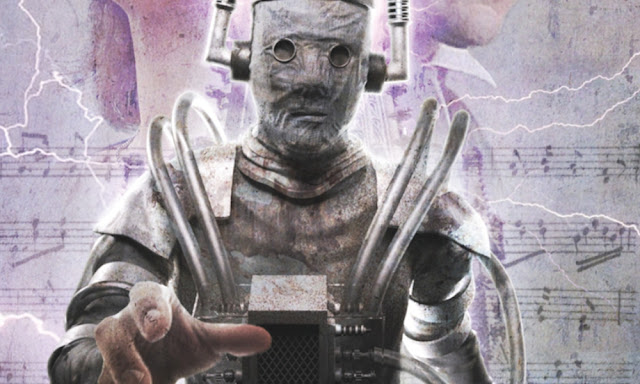 Paul McGann, is an actor who never got a real chance on the television universe of Doctor Who. But when it comes to his audio adventures, I always get excited for them and The Silver Turk takes us back to the early days of his incarnation, a while before Charley Pollard came along. This time he is joined on his travels with Mary Shelly, following on from the end of The Company of Friends. So in a recent sale, I pretty happy to get my hands on it.

During The Company of Friends, the Doctor leaves Samson and Gemma in Vienna to answer a distress signal and this story features the Doctor and Mary trying to get back to their friends. Sadly the adventures of Eight, Mary, Samson and Gemma were never to be though, for the Doctor has gotten his timing wrong, landing the TARDIS in Vienna 57 years after he originally left. There they find Alfred Stahlbaum is happy to show off his brand new invention, the mysterious and brilliant automaton know only as 'The Silver Turk'. But it isn't an new invention at all, it is a Cyberman.

In many ways The Silver Turk does for the Cybermen what Jubilee did for the Daleks - a lone Cyberman stranded on Earth, being tortured. And while the Doctor distrusts it, his companion shows compassion for it. The Silver Turk never quite hits the same notes as Jubilee did but both Marc Platt's writing and Nicholas Briggs' performance as the Cybermen keep everything interesting and actually turns the Cybermen into some interesting characters. It isn't so much that you feel sorry for them, you do at some points but they act like people with motivations and not monsters acting like monsters.

The characterisation is probably the best thing about this story, especially in the form of Mary Shelly. Mary was compassionate in The Company of Friends but in this story we get to hear her experiencing both the wonder and fear that the Doctor and his old friends experienced on a daily basis. I particularly liked the way that Julie Cox played Mary as it very different to all the other companions who wear their emotions on their sleeves. Mary on the other hand, is reserved and quiet but just as strong regardless. The story gives her a nice dynamic with the Eighth Doctor, who wants her open up a bit. With both Charley and Lucie who were both quite loud, it is nice to hear someone different with him. The Silver Turk also plays up to Mary's compassion but also her intelligence and determination but it also isn't afraid to have her freak out at certain moments.

The guest characters come across well too, thanks to strong performances and writing. Gareth Armstrong is good as the villain Dr. Johan Drossel but I was particularly fond of the slightly cowardly cabbie, Ernst Bratfisch, played by David Schneider. Perhaps the only weak link is Stahlbaum who, later on in the story, his motivations become very muddled.

There are lots of good ideas running through the heart of The Silver Turk. It is clever to set a story in the near future for a companion who comes from along that same period in time. To Shelly, 1873 is a very futuristic world. The Silver Turk is also based on the real life hoax of the Mechanical Turk and there is some strong imagery in the form of the wooden citizens of Marionettenburg, the deformed Cybermen, lightning on a tower above Vienna and a very strong use of the audio format in the form of singing and piano playing.

This story also features a new version of the theme tune and I must say I loved it! It is was loud and surprising but still very Doctor Who.

So The Silver Turk is nice all around, it is a brilliant mixture of ideas, plot and visuals in the way that the best of Doctor Who should try and reach. It also works as a fresh new start for the Eighth Doctor but apart from that, it is just a cracking tale...