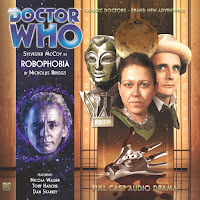 The Robots of Death is rightfully considered to be one of the best Doctor Who adventures ever created. It is creepy, funny, exciting and dramatic and a well written tale following an Agatha Christie kind of murder.

Sometimes, sequels just do 'more of the same but bigger', but this time around, Nicholas Briggs takes a number of themes from the original material and turns them on their heads. From the supposed death of our favourite Time Lord, we are never really sure who the baddies really are until we are quite a way into the story.

What is really good about this story is the way that Briggs has characterised the crew members. This isn't a sleek federation ship from Star Trek, nor is a freighter commanded by Beryl Reid in Earthshock. It is nearer to a disaster waiting to happen with frayed nerves and crew members who don't trust each other. The Captain doesn't give a damn about anything apart from arriving on time and the crew are too absorbed in their own situations to be of any use.

Robophobia also serves as the introduction story of Nicola Walker as Liv Chenka. At the time of this release, she was only really created to be a one time character. During the Dark Eyes saga with Paul McGann she returned to help him battle the Daleks, The Master and the Eminence. She is really great to listen too, making her first appearance really enjoyable.

The robots don't really get much to do, not in the same vein as they did in the Tom Baker adventure. But then, they aren't really the main focus of the story, this tale is about people, their hopes and fears and what pushes people to become killers...