Doctor Who: Kiss of Death - Review 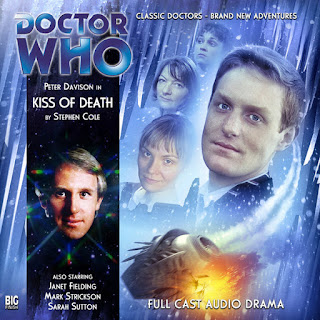 Kiss of Death was the second story in an unusually weak trilogy of audio adventures for the Fifth Doctor, Tegan, Nyssa and Turlough. It makes good use of Turlough, a character previously underused by both television and audio formats and successfully places him at the centre of all the action.

But it plays too much on the knowledge fans need of his character. It isn't a story that an average listener of fan of Big Finish in general could just pick up and enjoy. A lot of what is revealed here is nothing new, given that we all learned his secrets in his swansong, Planet of Fire when it comes to his Trion origins.

Perhaps the biggest problem with this story is author, Stephen Cole's lapse into melodrama too often. Melodrama can be interesting but this story feels like it comes straight out of a comic book rather an entry into the continuity of a television show well over fifty years old.

What Kiss of Death is though, is another chance to get to listen to this brilliant team of Peter Davison, Janet Fielding, Sarah Sutton and Mark Strickson. And that isn't a bad thing...