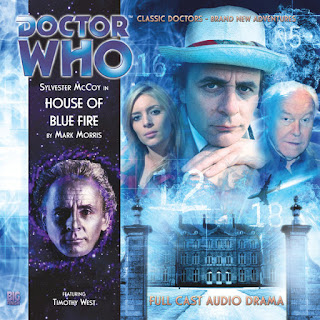 Amnesia, for some reason, is a main staple of the Doctor Who world, particularly with Big Finish. Usually, this is reserved for the Eighth Doctor, who sometimes goes from having minutes to years of his life missing. So when the first episode of House of Blue Fire opens with a series of guests claiming to not remember how they got there, it does feel like we are treading over things we've already been through.

But author Mark Morris creates a sinister with its characters, known at this time as only their room numbers. It has the feel of a Sapphire and Steel episode or the Sylvester McCoy episode, Ghost Light.

The Doctor doesn't appear until the end of episode one, which allows us to get into the heads of the mysterious guests and find out what really scares them but there is too much emphasis placed on making each character sound different. We've got a posh one, a rough cockney and the boring sexist all trying to contrast one another. When we meet the fourth character and find he just sounds ordinary, it is a bit of a relief. But each character is likable enough as they explore the sinister hotel and as they are killed off by the things that scare them the most, the tension begins to build nicely.

At a first glance, it looks like the Doctor's role here is going to be darker, giving us an intimate look at the more evil side of the Seventh Doctor's nature. He is even referred to here as the Master, which gives us a glorious double take as the Doctor wonders if the Master is really behind all of this! It is a shame then that it quickly becomes clear that there is something else at work behind all of that is going on.

The only other character in this story that I haven't mentioned is Mr. Soames, played by Big Finish regular Timothy West. This is a fairly thankless role as he is there to be mildly sinister in the first episode and a misguided scientist from the second episode. It is a good job then that West is talented enough to do a lot with little material and is engaging with what has been given.

Up until the end of the second episode, this story feels very similar to the Eleventh Doctor story, The God Complex but things take a drastic turn after the second episode. After they are all seemingly killed off from their phobias it turns out that none of it was real and that the Doctor has linked himself into their minds at the military base they are based at. He is trying to fight off the invasion of the evil Mi''en Kalarash, an evil from the early years of Gallifrey. And it appears he might have miscalculated.

This rather bold twist requires the story to virtually restart at the beginning of episode three but the move is more than worth it. In the real world, Soames is a Doctor and the rest of the amnesiacs are soldiers. The threat in the real world comes from Eve Pritchard who is under the control of the aliens and as soon as everyone is back in the real world, she begins to kill each of them off, one by one, all over again.

The second dream sequence is perhaps the weakest part of this story as it just re-treads what has already happened, just this time, on a plane not at a hotel. It is hard not to think that there is a brilliant three part story here, it is such a shame that Big Finish's experimentation with ideal story length as fallen to the wayside. And so much for being one of the most dreaded creatures in existence, the Doctor defeats the Mi"en Kalarash very easily!

But despite these little missteps, the story has some strong tension running through the opening episodes and the horror imagery is highly effective. It is a story which also promises some exciting new adventures for one of the amnesiacs, who finds out her name is Sally Morgan, who runs off with the Doctor...