Doctor Who: City of Spires - Review 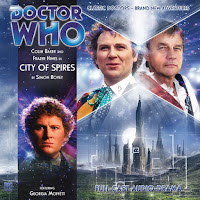 2010 saw the return of a much loved companion to the universe of Doctor Who audio adventures and not in his Companion Chronicle appearances, but in the main range! Alongside Colin Baker starred Frazer Hines as Jamie McCrimmon for the first time since The Two Doctors. This was the first of four stories to feature this pair. Because it featured the return to the highlands, this adventure begins like your ordinary highland adventure but quickly goes pear-shaped when the Doctor turns up and discovers someone has been tampering with time. Gigantic pumps litter the landscape, coughing up a continuous stream of black water, which the mysterious Overlord demands. Anyone who protests against the actions befalling the country are sent to the mercy of the ruthless Red Caps. But is this the eighteenth century the Doctor has arrived in or the nineteenth?

The brilliant news about this story is that Frazer Hines hasn't lost his touch. Even the loss of Jamie's memories can take away from how great it is hearing the Doctor and Jamie together again and Colin Baker and Frazer Hines sound great together. They really are a joy to listen too. And when you throw Georgia Moffett into the mix alongside numerous strong supporting actors, you've got the recipe for a brilliant tale.

The less than brilliant news is that City of Spires ends up being less than the sum of its parts. Perhaps the biggest problem for this release is how the arc is set up, having listened to the story for its almost two hours running time - it just ends and nothing gets resolved with most of the major plot points being pushed into the next story. All this does is make the listener ask why this was sold and marketed as a single release when the story hasn't even finished!

Of course, this could just be a way of Big Finish ensuring the listeners buy the next release but for those of us who like our stories to have a beginning, middle and an end, this is just frustrating. And of course, as a life long Doctor Who fan, I don't always want them to be in that order, just have them included somewhere along the line.

City of Spires is a story to buy if you are a Jamie fan. If you are then both Frazer Hines and Colin Baker are brilliant and you will really enjoy this, just be aware if you want to find out what is happening then you will also have to buy the next three releases to get the full story. But the final story, Legend of the Cybermen also has Wendy Padbury as Zoe in it, so you should buy it.

Big Finish do these moves every-now-and-again and so long as they continue to, I'll keep getting my card...