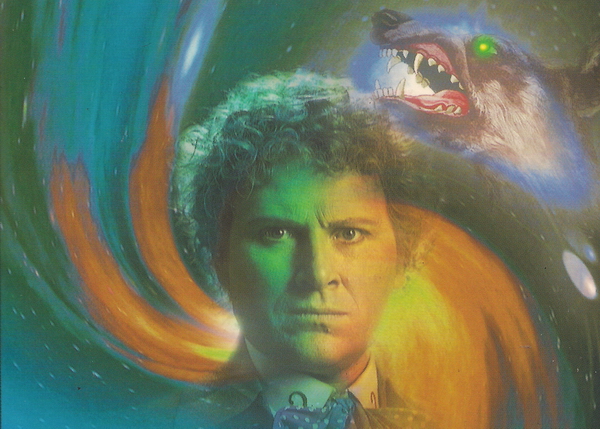 Business Unusual is a book with two major hooks. And if the first doesn't get you then the second will. The first is the return of Melanie Bush, played by Bonnie Langford in the television series, this is her introduction story, a proper one, not how she was brought in during the television series, Trial of a Time Lord. Craig Hinton's book for Virgin's Missing Adventures' range, Millennial Rites sought to capitalize on John Nathan Turner's back story about how Mel first joined the TARDIS after she helped the Doctor stop the Master from taking over the stock market, something which Gary Russell manages to include in this novel - but beyond that, we knew literally nothing. I believe the reason why Virgin never plugged this gaping hole in the continuity of the show is because many of the fans detested Mel and it was probably a hard job trying to find someone to write for her. But in print, Mel comes across as less obnoxious and more likable. Russell gives her a home and family in the form of Christine and Alan Bush. Suddenly Mel comes to life, she feels real and when she does scream, it is completely understandable but you have to read the book to find out why.

The second attention grabbing thing about this book is the return of Brigadier Lethbridge Stewart and that this is the first time he and the Sixth Doctor actually meet, unless you count the brief moment between the pair in Dimensions in Time. But it is sad that Russell keeps the pair apart for the large majority of the book, save for a small moment towards the end of the tale. However, just as he did in The Scales of Injustice, Russell works wonders with the Brigadier. He is incarcerated by SeneNet, the story's main evil organisation and the former army Brigadier-come-math teacher is forced to come face-to-face with a UNIT private that he left for dead in The Claws of Axos. The Private had lived on, horribly scarred and disfigured and bitter and the book also forces Lethbridge Stewart to think about some of his feelings for a certain Doris, who we know he had married by the time Battlefield came along.

But the main thing that is outstanding about this book is Russell's characterisation of the Sixth Doctor. In his trademark introduction, Russell talks about how he wanted for the Sixth Doctor in the way that Colin Baker wanted to play him and on that note I think he succeeds. This version of the Sixth Doctor is who Baker could have gone on to play if the BBC hadn't so cruelly cut his tenure short. While he is still thunderous and grandiose, he is affable, he shows another side to his personality, a calmer side. A more tolerant side. Why we haven't seen this side of his Doctor in print since is beyond me.

And as for the plot, Business Unusual is really enthralling and at moments gruesome, that picks up right where The Scales of Injustice ends. SeneNet is run by the managing director, an ailing cyborg who is desperate for a brand new body, a body which the Nestene Consciousness is willing to provide for him at a price, a price that happens to be the Earth. And I don't understand how I didn't get that SeneNet is Nestene in anagram form! How thick am I?!

Many of Russell's unforgettable characters from The Scales of Injustice come back here, such as Ciara and Cellian - The Irish Twins, and Mr. Jones - the blonde tanned man, return with some new arrivals, Roberta - a woman with one of the most tragic backstories I have ever read. Not only did Mr. Jones take advantage of her at a bar, he drugged her, got the Autons to chop her legs off and then planted new memories in her head. And that isn't the end of the gore, the end of the novel sees thirty-odd children missing their left hands - this is a novel that doesn't pull its punches.

When all is said and done, the cover of the novel is the only real downside of this book. The Nestene Stalker Hound is of peripheral relevance at best and the picture of the series Twenty-Two Colin Baker is so badly chosen that Russell has to work the bad haircut into the novel just so it makes sense...