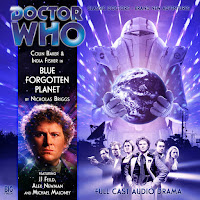 After her nine year run, Blue Forgotten Planet had to bid farewell to the popular audio companion of Charley Pollard, Edwardian Adventuress. This release brought to a close - her time with the Sixth Doctor and also acts as a closure to the Viryan arc, which had been present through one part adventures from 2007 to 2009.

Set roughly in present day, the human race has forgotten their entire history and culture. Without some strange medicine, the masses are suffering from paranoia and severe aggressive tendencies, with only a chosen few being given regular doses of a cure from their mysterious benefactors, the Viryans. The Doctor and Mila - who was a shape-shifter who took Charley's form, arrive right in the thick of things, to discover the entirety of human history has been turned on its head following the events of Patient Zero and every human on the planet has been infected by one of the viruses from the Amethyst Station. But the Viryans are on the case, but the cure might just be worse than the infection and as if things weren't complicated enough, the Viryans have someone hidden away in cold storage, someone who has a personal score to settle with the Doctor's travelling companion.

Blue Forgotten Planet had a lot to accomplish, especially plot wise, in a fairly short space of time. And to Nicholas Briggs credit, it manages to do what it wants to do without sounding rushed and cramped and manages to sell a interesting and chilling story at the same time. And the five secondary characters do a good job of representing the various factions who survive on Earth. Alec Newman and JJ Feild put in nice performances as Ed Driscoll - the leader of the people who don't get medical treatment and David McAllister - Earth's liaison to the Viryans. Michael Maloney reprises his role as the voice of the Viryans - the ruthlessly logical and by-the-book guys who are trying to solve Earth's problems.

But what about dear Charley? Well, while the pairing of Charley and the Sixth Doctor is one of the best moves Big Finish has ever done, there was sadly only ever going to be one way of getting out of the narrative arc they had written themselves into, so those of you looking for a story which doesn't feature a 'get out of jail free' card will most certainly be disappointed. But for those of you looking for a meaningful character moment and an excuse to cry into some tissues, then you won't come away disappointed. And the big revelation of Charley's past does happen, for those of you who are wondering, the impact is not then properly felt until the final scene between India Fisher and Colin Baker and then, it is.

And is Blue Forgotten Planet a nice way to conclude the Charley Pollard story? Well, the answer to that is yes and no. From the perspective of the Sixth Doctor, this is brilliant and is neatly slotted into Big Finish canon. But for Charley, the ending was far too ambiguous to ever be truly satisfying. And of course, now we know what it was left that way with the Charlie Pollard series currently in its second series from Big Finish. But at the time of this release in 2009, the more Machiavellian listener of Big Finish could be forgiven for wondering if something was in the works...