Doctor Who: The Awakening - Review 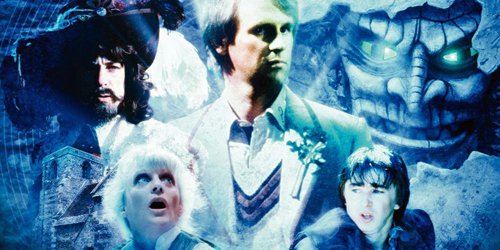 Giving in to Tegan's request to go and see her grandfather, the Doctor takes the TARDIS to the seemingly sleepy town of Little Hodcombe in 1984. But Little Hodcombe holds a dark and old secret, something in the church is waking up, something sinister that lurks behind a crack in the wall.

Does that sound familiar? It seems that Stephen Moffat remembered this story when he came up with his cracks in the universe storyline during the entirety of the Matt Smith era. Either he remembered it or was taking notes. And while this is a fairly good little story, one of those notes probably told him to do something better. 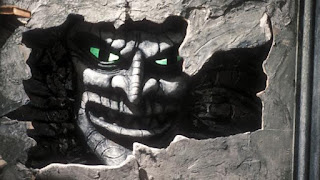 The Awakening is a story that is neither blindingly good or blindingly dire, it sits uncomfortably in the middle coming across as painfully mediocre. It is a story that begins brilliantly and goes slowly downhill from there. The opening scenes with the Civil War soldiers chasing Jane are very effective and are a brilliant misdirection that makes you believe that something has gone wrong with time. But after that, it becomes like painting a Doctor Who story with numbers while it rushes to its confusing conclusion.

Unfortunately, the Malus is one of those Doctor Who monsters who work better in promotional pictures and overactive imaginations. Once you actually see it on screen, you can't help but feel let down. With the Malus is stuck behind the wall, the villainy comes from the mad Sir George Hutchinson. But from the moment he appears on screen, actor Denis Lill hams up his performance and almost ruins everything.

It seemed the story forgot that the reason the TARDIS crew had come to Little Hodcombe was to visit Tegan's relative. This could have given us something new to learn about her character but the script keeps them apart for almost the entirety of its runtime. Having them visit her grandfather serves the plot rather than any kind of characterisation and just gives us a reason to have our heroes in that specific place and motivation for all their snooping around, something they have never needed before...