Doctor Who: The Apocalypse Element - Review 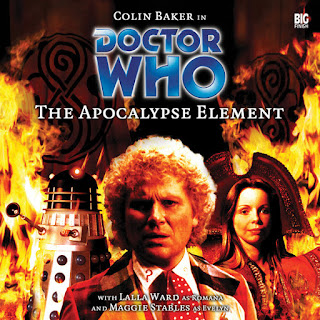 For the end of its first year, Big Finish pulled the kids gloves off and decided to deliver the epic, The Apocalypse Element - it is ambitious, action packed and complicated, with two stories folding into one, like an old fashioned six-part adventure and it marks the return of Lalla Ward as Romana.

This release also sees the return of the President Borusa-like and Coordinator Vansell from The Sirens of Time in slightly more substantial rules, attending the Temporal Powers, trying to hash out a peace treaty. They're also hoping to discover the whereabouts of a vanished planetoid called, Etra Prime, where President Romana had disappeared twenty years earlier.

This adventure also sees Evelyn journeying away from Earth for the first time and she carries herself with charm and courage. Romana's entrance is memorable, but I won't spoil how she returns and she is commanding and charismatic as only Lalla Ward can be! It is also a good turn for Colin Baker who takes this brilliant script and runs with it. His Sixth Doctor is almost too relaxed about the dangers to begin with but gradually becomes more passionate and desperate as the stakes continue to rise.

And the Daleks make themselves known but I won't spoil anything else that happens after that. Lets just say this is one of their most dangerous and audacious schemes in their history and it is no wonder that Russell T. Davies alluded to this adventure many times when discussing the origins of the Time War.

There are some complaints about this story floating around the internet but I personally think it is a good early adventure. And if it sometimes fall short thanks to its somewhat convoluted plot, Shakespearian monologues and noisy chaotic battle sequences - I think it more than makes up for its own defects. And I think that Big Finish should have challenged itself in its early days, rather than confining stories to poltergeists in girl's boarding schools or Daleks trying desperately to obtain a library card.

This is also considered to be the second part of Dalek Empire, which began with The Genocide Machine, which introduced the Daleks to the world of Big Finish. In both stories the Daleks use a Trojan Horse tactic to get past the transduction barrier.

If there was one thing that I felt a little let down by it was the ending which tapered off into moralising speeches and left behind a big loose end to help set up some spin off series' - Dalek Empire and Gallifrey. Had they been able to get Louise Jameson and John Leeson back as Leela and K-9 then it would have worked as a prequel and truly been a massive epic...