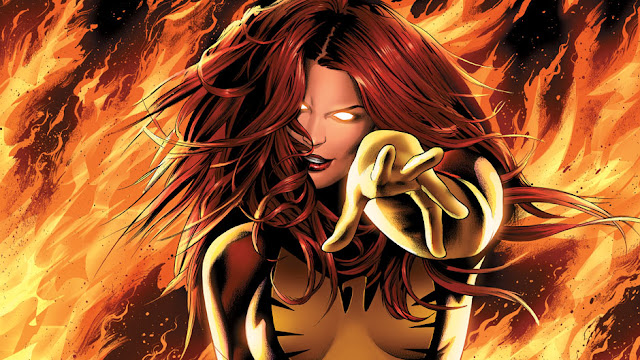 I love artwork by Greg Land - Nightwing, Birds of Prey, Ultimate Fantastic Four, The X-men. His artwork has captivated me and helped to propel me into many a comic book adventure. Of course, I am aware of his faults, but he is far away from the headache induces messes sometimes done by artists like Chris Bachelo. And for me, Phoenix Endsong is the pinnacle of his career to date.

Ever since Jean Grey bonded with a limitless source which gave her the power to save the lives of her friends, the Dark Phoenix saga has been legendary. However, this has meant that writers have brought the Phoenix back time and again and diminished the character of Jean Grey to the point that she has become the brunt of the joke about comic book resurrections. Resurrecting her and the Phoenix has become old, but it is a relief that Phoenix Endsong is a really well written piece, that is sadly undermined by the other attempts to tell a story like this. Lets face it, Phoenix stories aren't interesting or credible anymore.

But Endsong is a story about love, with the Phoenix searching the cosmos for Scott Summers - AKA Cyclops. It channels the energy of Jean Grey in attempt to feel the same way it did when she was its unwilling host. But complicating the Phoenix's mission is the Shi'ar and Quentin Quire, a mutant who possesses omega level abilities. While the Phoenix searches for its love, Quire wants to use its powers to resurrect the girl he loved. And the Shi'ar are hunting the Phoenix partly to stop it from hurting anyone else and partly out of revenge.

The plot works really well because it focuses on human emotion and author, Greg Pak wonderfully avoids putting the focus on the Phoenix itself and instead on the relationships between Jean and her former teammates. But while clever, this does tale a lot of the possible danger out of the tale, long terms fans know that the Phoenix is seriously dangerous, but the plot doesn't really do much with that except for tossing around the odd death toll number here and there. In a weird sense, the book's real strength is what also works to undermine it.

But it is Greg Land who, with the incredible colours of Justin Ponsor, is the real star in this book. Land does a brilliant job handling both the action and the drama as he seems to frame each panel perfectly. Ponsor manages to match Lands art perfectly with his vivid colours. I only really have two problems with the art however. Female faces manage to look similar, while an initial glance might not show this, but you do feel like you are looking at the same colour pallets, swapped around a few times. The other critiques is that some of the faces are muddy with a lack of details and overdone with colours. While the female characters tend to avoid these problems, characters like Beast and Wolverine suffer quite a lot.

Endsong is a really surprising Phoenix tale, but not as special as any other X-Men book. Pak manages to succeed in being different but the plot rarely feels urgent or epic and using the Phoenix is any given story is either going mean being one or the other. A story with the Phoenix needs to feel big or it gets completely overshadowed by the original Phoenix saga. While it does seem unfair to compare each story like this to original saga but the first saga was what got it really right. Every saga since has been compared to it and studied under a microscope. Endsong is a strong character drama which really feels like an epilogue to some larger event, but the threat doesn't feel real. It feels like a side attraction that doesn't really matter. But it is still an enjoyable character piece and Greg Land's art is amazing. While it might not be required reading, long terms of the X-Men will certainly enjoy it....