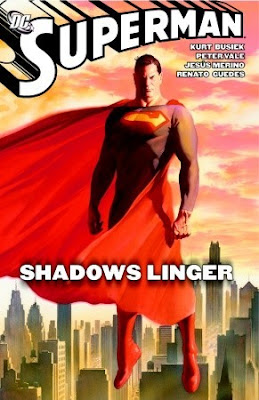 This graphic novel collects the final run of Kurt Busiek's Superman tales, before he moved onto the Trinity series. Busiek's run on Superman was an enjoyable one. Shadow's Linger is a good example to see what Busiek's run did well and what it didn't do well and how it was ill served, both by DC Comics and by circumstance itself.

Busiek was the first writer to bring back Superman's super-intelligence in the novel, Up, Up and Away. He managed to continually impress readers with its use, he uses him to fight three evil geniuses and an alien invasion, all before breakfast. To this end, Superman is able to identify a specific type of moon dust - on sight - but he never comes off as standoffish or more alien. And the second story arc see's Superman creating a massive library of all of Earth's knowledge and this is a really fitting coda to Busiek's tenure.

At the very centre of this book is the re-introduction of two classic villain's, the Insect Queen and the Galactic Golem. I particularly liked the story concerning the Insect Queen and how Busiek kept her origins much the same, linking her with Lana Lang. Though I didn't like his trying of the Insect Queen to Lex Luthor. Sadly, I found all the ins and outs of the Galactic Golem story a little too hard to follow but what I did like was how Superman's supposed self-sacrifice turned the heart of his villain, Paragon.

It is unfortunate then that both these stories are a little on the light side. This could have been because Busiek was leaving the title and to date, we have still seen very little of both the Insect Queen and the Galactic Golem. This was possibly because this story was being told in the weird spaces between the story, Last Son and one can't help but to compare this tale to the big return of the Legion of Super-Heroes, something else which was going on at the time. And everything done by DC Comics at this time was leading up to Final Crisis. This has no real baring on Busiek, but one can't help but think that his Superman tales are only ones to be flicked through, rather than actually read, before the new main event...