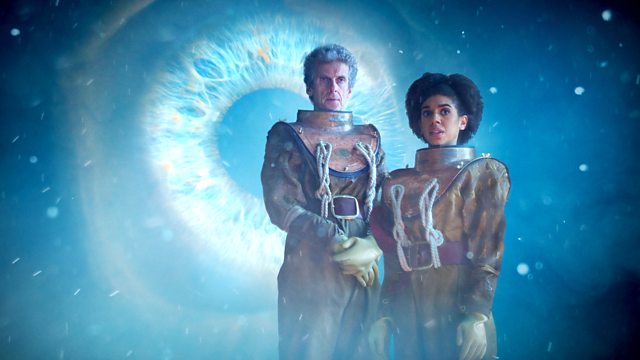 Following on from, The Pilot and Smile, a pair of introductory stories for a promising new TARDIS team in the form of Peter Capaldi and Pearl Mackie, comes Thin Ice, a script from Sarah Dollard, worthy of the excellence of the new pair. There is so much to praise and celebrate in this episode, it just made me smile the whole way through! Capaldi and Mackie make such a brilliant comedic pair with this script offering the Doctor a number of hilarious lines. From their early exchange about the temporary deleted companion, Peter, to Bill's exclamation in surprise, this episode is a hoot. And the Doctor gets in a speech about the sonic screwdriver is not just sonic but also a screwdriver. His ongoing obsession about a coin trick he sees is more than enough to distract him from seeing what is really going on, while he is his usual ingenious self when trying to get help from the foreman of a workhouse the pair are investigating. And there is a long wind-up when the Doctor tells Bill to let him do all the talking and how one must remain calm in those types of situations and the punchline of him punching the noble is entirely worth it.

Thin Ice is effortlessly fun in a way the show hasn't been in a long time. In fairness, the show had been more interested in telling serious stories which reflected the times they were made in, with series nine in particular focusing on wars and the problems which comes with that. But an episode like Thin Ice serves as a reminder how fun 'romp' episodes like this one and The Return of Doctor Mysterio can be. Doctor Who can't be on a sugar rush all the time and ruins one of the most attractive aspects of this show, its ability to change genres on the flip of a coin. And boy is there some tonal whiplash in Thin Ice. The scene with the Doctor funnily defending his stolen screwdriver is followed by a scene featuring the death of a child, something which the Doctor seemingly ignores in favour for retrieval of his beloved screwdriver. 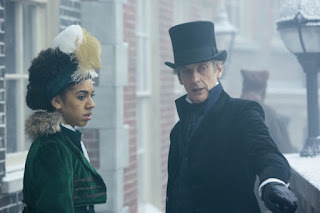 With such sudden shifts between dark and light tones in this episode, Thin Ice runs the risk of undermining itself. So it is a good job that Dollard's script is nimble enough to keep us interested and that the performances are confident enough to serve as an anchor for the shifting tones. Capaldi is certainly the subtlest of the new era Doctors with his ability to underplay moments easing transition moments of darkness and light because he never goes to far in either direction. Even when he makes a speech about human equality, he chooses to go small. Now, Capaldi can chew the scenery with the best of them, his speech about war in The Zygon Inversion is so defined that it might just be my favourite speech from Doctor Who ever. His first two series' as the Twelfth Doctor saw him as more of a stripped back Doctor but here, Capaldi is just the Doctor and it is simply brilliant.

Pearl Mackie also stands out and this episode really gets to showcase Bill. Her comedic timing is a brilliant match for Capaldi and it brings out Bill's sense of humour without it feeling like actors trading wisecracks. This episode also features a companion's hallmark moment, with her assuring a child that everything is going to be okay. And what is nice in this little moment is the twist, the child doesn't believe her. Bill is still learning what it means to be a companion, with the Doctor still positioning himself as her tutor and Mackie's performance and Dollard's script present her mistakes as those of someone who is inexperienced and not mistakes from someone naïve or foolish. Mackie's soul task her could be a quietly difficult one. She has to play Bill as a modern and sophisticated person who manages to go back to Victorian England. Bill herself points out that during her trip to the future in Smile, it was easy enough for her to detach herself from everything going on because the majority of the deaths didn't happen in front of her. But there is no such distance possible in Thin Ice as a child is swallowed by the ice right in front of her. 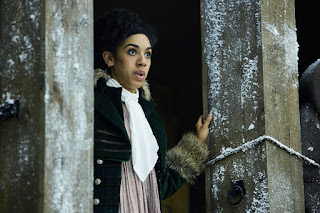 I have been a fan of Doctor Who for as long as I can remember and I can't picture an instance where a companion was so distraught over a death before. And while Bill's reactions are perfectly normal for anyone in those circumstances, they don't really suit the world of Doctor Who. The episode then sees the Doctor being right in the wrong way, with him informing Bill that her reactions are neither logical or practical. It was nice though to see that the Doctor has time for nothing but outrage at the deaths that happen around him, no matter what he might claim to the contrary. Bill's grief and outrage at the Doctor for the events unfolding around her are important character beats but the episode seems to know it can't get bogged down for too long in these moments. Mackie manages to convey a great deal, with shades of defiance and begrudged understanding, when she tells one of the urchins that she has moved on and is working with the Doctor again.

And Thin Ice doesn't shy away from the kind of racism a companion of colour would come across in Regency London. While the episode does follow the precedent of diverse casting in a way which reflects 2017 more than it would 1814, it does pretend that 1814 was some kind of post-racial utopia. The episode doesn't let anyone off the hook for their bigotries even when you consider the time period this episode is set in. Thin Ice is a story with words like 'privilege' and 'whitewash' in its vocabulary, so it is more than justified to look out the episode deals with the issue of racism. But there are a few moments which don't really sit right, one could have done without Bill's look of wonderment after the Doctor's speech and the Doctor's getup makes him look like a member of the imperialist culture which would have spawned such an insidious creature as Lord Sutcliffe. However, an episode as great as this one can be forgiven for this occasional misstep, especially when its larger points are so very sound.

Now, for fans like myself, large chunks of this episode seem like the generic material one can expect from your average brilliant tale. We have the same kind of frosty landscape as we did in The Unquiet Dead. The street urchins reminded me of Nancy and her gang of street-kids from The Empty Child/The Doctor Dances and the chained beast, The Beast Below. Bill's concerns about racism mirror that of Martha's from The Shakespeare Code and the unpleasant encounter with Lord Sutcliffe are like that which Martha encountered in Human Nature/The Family of Blood. The Doctor's insistence that Bill tells him how to react is like that between himself and Clara in Kill the Moon, while Bill's questioning of the Doctor's nature is along the same lines as Donna's from The Fires of Pompeii.

But does that make everything seen in Thin Ice derivative? Not at all. It all just makes an episode of a show which has run for ten series' in its modern era and twenty-six in its classic era. I'm sure it is to be expected that a show running for ten series' should delve into its past for references to please long terms fans like myself. The question is how well executed the story is and to what extent it can subvert that formula. Thin Ice does the majority of the latter, with both Bill's assurances to the little girl and the Doctor's speech both falling a little flat. But for the most part, Thin Ice is just about the show getting out of its own head and delivering a really great episode, one that is funny, adventurous, insightful and really dramatic. Both the direction from Bill Anderson and the score from Murray Gold is solid and unobtrusive and support the script's best aspects, Dollard's writing and the performances from Peter Capaldi and Pearl Mackie. But more than anything, this episode is just fun and that is a sign of Doctor Who at it's very best...