Doctor Who: Point of Entry - Review 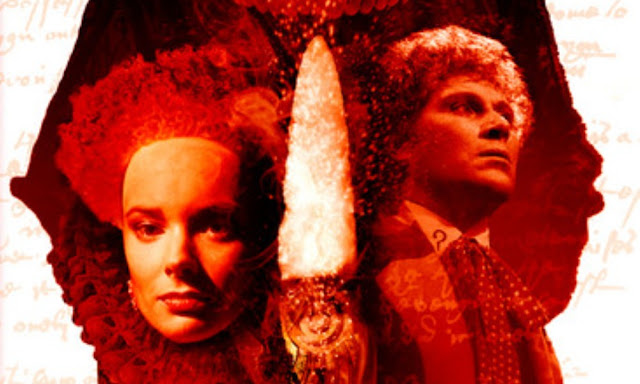 Kit Marlowe has been hit by writer's block. And he has a strange visitor - a Spanish man who promises him all the inspiration he could ever need to finish his work, Faustus, if Marlowe will help him locate and procure a mysterious stone knife hidden amongst the Queen's treasures from the new world.

The Sixth Doctor and Peri hadn't expected their tour of rogue asteroids to be interrupted until a brand new and rogue asteroid emitting a distress call forces the TARDIS to land in Elizabethan England. Really, this is a time which isn't much safer than the depths of space and within minutes of landing, they find a tongueless man being held in some stocks, Walsingham is quick to use torture as a way of gaining information and there is a very strange roaring noise from the skies which causes people to get violent. And if those points weren't bad enough, someone is trying to re-enact the sacrifices to Quetzalcoatl.

Authors, Barbara Clegg and Marc Platt have managed to blend aliens, Philip Marlowe and Quetzalcoatl, you have to give them points for ambition and for the most parts, all these points do work, if you sum up the entire plot into one sentence. The only problem with this story is that the tale only makes sense if you do sum it up into one sentence. Having to stretch the story out to a two hour audiobook means they have to throw in more strange and completely random events into the mix. And in addition to the historical figures, there is the occasional walking and rotting corpse, a landlady who serves only as to give us some chatty expositions and a Spanish dwarf, distractingly named Iguano.

Many of the early Lost Stories were hit and miss and sadly, Point of Entry is one of the stranger misses. All the elements for a cracking good story are there but they just never gel into an interesting story, much less a really engaging one. In the extras, actress Nicola Bryant refers to this story as 'dark, but it is just bloodstained. Big Finish had already released several more spine tingling stories before this one...