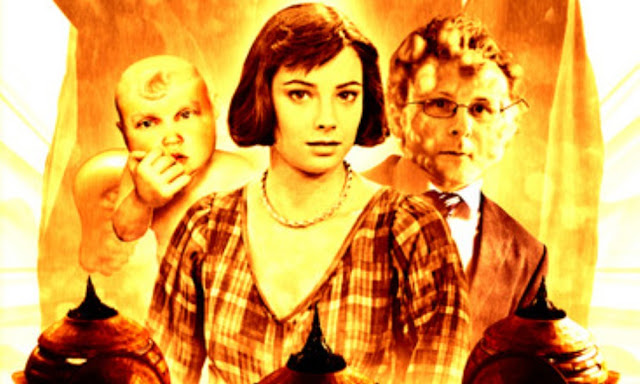 Surely anyone should know that in the movies, anyone saying the line, "What could possibly go wrong", is ultimately punished. So when the Doctor decides to look up an old friend and says that he is the least likely person to attract interest from alien dictators, invasion fleets, malign conquerors. He promises Peri that he is that his home is a place to relax and what could possibly go wrong, well, what happens? Everything goes to pot! He and Peri are damned. And damned is a good way of describing this episode, just like Paradise is a good word to describe a space-station full off alien monsters, the Elohim, mute Cherubs, that is floating above a planet churning with Lava.

But Targus Delta is only a paradise for the rich - its basically a planet version of wall-street. However, the Doctor's friend Albrecht took a sudden to Paradise 5, the pleasure station orbiting Targus Beta and never returned. Suspicious but not wanting to raise questions by landing the TARDIS on the station, the Doctor sends Peri in undercover, while he stows away to get on-board. Peri discovers the station is certainly exclusive, with only five or six guests staying at any one time. All the menial tasks aboard the station is done by the Cherubs, while they can't speak the Doctor manages to corner one who writes, 'Beware The Elohim', in dust.

But the guests on Paradise 5 don't have to worry about such things, in fact, they don't really need to worry about anything. All they have to do is sit back on some comfy sofas and let the famed Paradise machine do its work.

Doctor Who is a show about time travel but many of its classic stories are timeless, because they don't belong to any Doctor, they could happen to any of his incarnations. They aren't a product of their eras, nor are they any part of a larger plan for any series. Paradise 5 is one of those timeless stories. It is a damn good solid adventure that works just as well on audio as it would have probably done on video, if the BBC hadn't cancelled the show during the Colin Baker run and if the production office had the money to pull off the special effects at the time.

Unlike quite a few of the other stories from the Lost Adventures range, Paradise 5 doesn't require you to have knowledge of previous adventures for the Doctor. And while this story is built upon the most basic of Who layouts - disappearing people, dodgy technology and evil aliens, there are plenty of twists and turns which keep it from being a paint-by-numbers sort of plot. It is certainly a story that would have been shame if they had left lost...