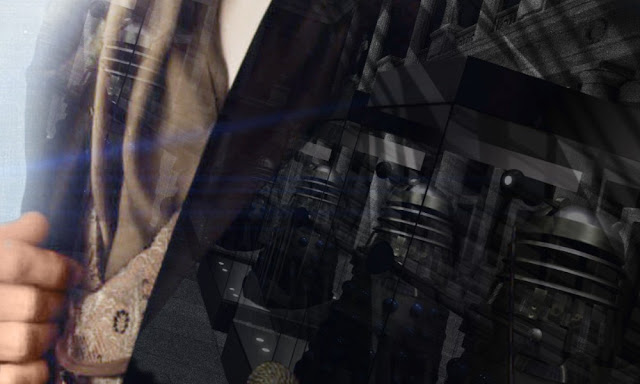 Museum Peace had quite an interesting origin story as it first appeared in the Dalek Empire Anthology first published in 2006, written by James Swallow, editor Nicholas Briggs loved the story so much that he selected it to be recorded as one of the subscriber only releases. And like others of its ilk, Museum Peace has been recently released as part of the Short Trips Rarity's range. The story depicts the Doctor in the world of the Dalek Empire range, meeting with an old soldier, Kalendorf, in a museum dedicated to the Dalek Wars.

It is obvious that Swallow wrote this tale with in it mind that this would be the Eighth Doctor at the end of his life and he is seriously considering eliminating the Daleks forever. When this story was originally released, we knew very little about the Time War and now, while we know a heck-of-a-lot, I would wedge this story somewhere between the Eighth Doctor stories, To the Death and Dark Eyes.

Not that it really matters where this story should be placed. Swallow does some truly excellent work here. I don't know much about the Dalek Empire range and Kalendorf but I quite liked him here, his interactions with the Doctor, a man who is more idealistic than pragmatic. The story gets broken up by some intermittent bits of narrative told from the perspective of a Dalek, now a museum piece and like Ben Aaronovitch did with Remembrance of the Daleks, Swallow is brilliant at writing from the perspective of this metal dictators. You can really feel their hate oozing out of the speakers of whatever device you to listening to this story on. The end of the tale is particularly dark, tragically so but sadly inevitable.

Nicolas Briggs is a really good reader and he does an awesome job with the sound design which really helps to paint the pictures this tale is trying to tell. I vaguely remember reading the print of this tale years ago, but Museum Peace really shines in the audio format and I found myself getting a new appreciation for this tale...