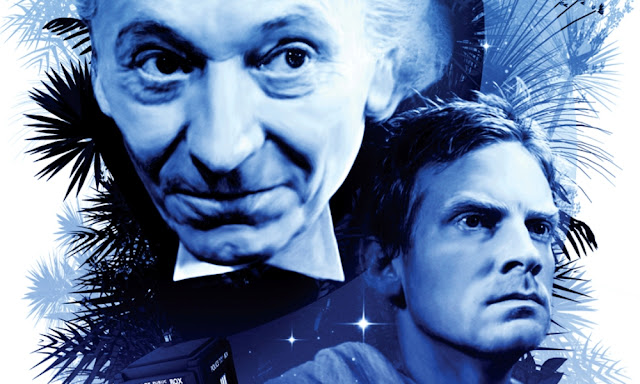 After listening to the first series of The Lost Adventures, you wouldn't be blamed for thinking the campaign slogan, 'found at last', might have been better off being, "better off lost,", however, even after the, frankly, lacklustre first series, a second series was quickly commissioned. The first release in the second series was the feature two William Hartnell stories, originally written by Moris Farhi in 1964 but never got past the pitching stage at the BBC. A couple of years before this set was originally released, the scripts for these two stories where printed in the fan magazine, Nothing At The End Of The Lane and it wasn't long before they were to be adapted by Big Finish for an audio release.

The two stories in question feature The First Doctor, Ian, Barbara and Susan, and given that two of these four stars have passed away, it was never going to be a full cast audio drama, but more of an enhanced audiobook, along the same lines as The Companion Chronicles. Nigel Robinson was in charge of the adaptations, while William Russell and Carole Ann Ford were brought back to reprise their roles as Ian and Susan. They also bring with them a sense of consistency where Russell voices Hartnell's lines and Ford, Barbara's lines. There are also guest performances with John Dorney and Helen Goldwyn making appearances in both stories. At first, the strange way of telling these stories does take a little while to get used too, there is a lot of slipping between narrators at the beginning, but it works brilliantly overall. It is a really compromise at doing a complete talking book and having to recast the original performers. 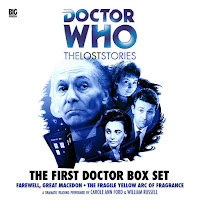 The first story is Farewell Great Macedon, an epic six-part story which spans three discs! With it being over three hours long, it would have made a nine-part story if it had been on during William Hartnell's time. This story sees the TARDIS crew landing in the Hanging Gardens of Babylon and becoming involved in the court of Alexander the Great. As with many Hartnell- historical stories, events contrive to keep them around, this time with the TARDIS springing a fuel leak. As the Doctor has to work in refuelling the TARDIS, a group of local conspirators, make a plan to kill Alexander and his successors to gain power for themselves.

Despite the length of the story, Farewell Great Macedon is fairly plotless and any plot that features is fairly linear. Alexander's friends are killed off one by one but despite being designated omens by the local prophet, the TARDIS crew doesn't do a whole lot. Sure, the Doctor does a lot of saving lives of other characters and there is a lot of interaction between the crew and Alexander's court of characters but no one investigates the murders going on, the conspiracy seems to unfold around them with no one paying any kind of attention. So when things finally do shift in the final two episodes, it feels slightly rushed. With the TARDIS crew accused of murder and Alexander gravely ill, things do get a little more interesting. The story doesn't do much to draw out drama from the TARDIS crew, though it does tread the same ground as The Aztecs did.

Where this story does succeed though, is in its characters. Several people in the CD Extras comment on how Farhi, just gets these characters, even if he would have only seen up to Marco Polo by that point. The Doctor is certainly the Doctor of that era, often side-lined but irascible and clever, sly when he needs to be but also compassionate. One certainly wants to see William Hartnell performing the kind of material he gets in the second two episodes. Ian doesn't get a lot to do, but what he does do is excellent and there is some great arguments between him and Barbara about changing history and he even gets to argue with one of Alexander's generals at one point. It is Barbara who gets the best material, she is torn between her admiration for Alexander and her knowledge of his imminent fate. Only Susan really suffers, there is an awful bit in the beginning where she thinks they are all dead and then she really is a non-entity because Ford seems to spend most of her time voicing Barbara instead.

I feel that the worst thing you can say about Farewell Great Macedon is that William Hartnell and Jaqueline Hill aren't in it, while Russell and Ford acquit themselves nicely and despite their age, they are both energetic readers. Even when there didn't seem to much going on, I found myself constantly engaged, in fact, it was only the parts where I paused the play to do something else where I realised that very little was actually going on. Another slight problem was that there were just two people voicing the group of conspirators and consequently, they all sound similar and hard to tell which one is which and as they all had the same personalities, you really were stuck when you were supposed to be about which one was which. On the other hand, Alexander's councillors had enough personality to both come across clearly.

Russell's performance as the Doctor is brilliant, without never becoming a caricature and there were times when I thought that Ford's lines were actually being read by Hill. And of course, they perform their own characters brilliantly, even after fifty years having past. It was a nostalgic joy to listen to the two actors work.

The weak performance in this story comes from John Dorney as Alexander the Great. Most of the time he was serviceable but his voice just doesn't have the necessary weight to pull off a role like this. His quieter scenes were good but those where he had to shout, he just comes across as someone who has to shout because he has no other way of getting people to pay attention. But his monologue in episode six, about his vision for world peace, a world united by one common goal, was wonderful and almost makes you forget his weaker performance elsewhere.

Though it may be a bit long and meandering, Farewell Great Macedon would have been one rewrite away from being a great historical which would rival what would always be the definitive one for me, The Aztecs. And it really is a shame that David Whitaker didn't pick this story up, I would much rather have seen this one, rather than lacklustre stories like The Sensorites, Planet of Giants or The Keys of Marinus! 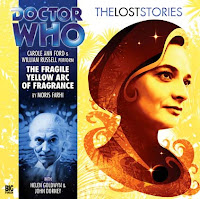 This particular box set is rounded up by the strangely entitled story, The Fragile Yellow Arc of Fragrance. It is an interesting little one part story, light-years away from the kind of historical tale that Farewell Great Macedon in every single way. The story picks itself up on an alien planet where the group have spent the past few weeks. The Doctor has spent the past few weeks on Fragrance trying to fix the TARDIS to send Ian and Barbara home. However, during their time there, a young man called Rhythm has fallen in love with Barbara, something which ends with dire consequences for one of them.

Had this story been produced it would have been different to almost everything that would have gone before or after it. Though I do doubt that the production team would have had trouble creating the kind of visuals that are on show in this tale. The triumph of this story is also its main sadness and it gives Barbara a lot to do, even though Jaqueline Hill isn't here to perform it. But it is still a fascinating and sad little story, completely unlike anything that has ever been done in Doctor Who. And the last few scenes, where everyone realises what Barbara has done are especially heart-breaking.

But for some reason the story also includes a weird little sub-plot where the Doctor shows a couple the interior of the TARDIS. Ian distrusts them and for good reason, the Doctor kidnapped Ian and Barbara for less! But other than this little problem, this is a damn good story.

There is a lot to love in this box set and it gives a couple of nice little stories for the first TARDIS team, a crew who remains one of the best the show has ever had. These stories are great if you want something to press your nostalgia button, while still managing to do something new and exciting...