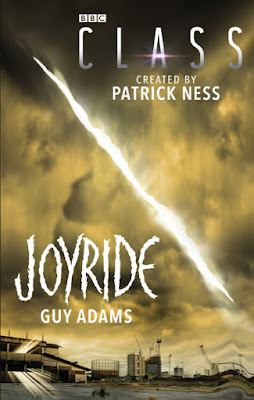 People in and around Coal Hill School aren't acting like themselves. Of course, coming from the world of Class, this isn't something new. But the way they are acting is extreme, almost like someone else is in control...

If you kept up with Class last year, or are waiting till it comes out on television this month, you'll know it wasn't received too well. People didn't think it was bad but didn't think it was good either. Personally, I liked it. I think the problem was that the BBC marketed it wrong. Advertised as an adult drama, there is nothing in here that wouldn't be seen in something like The Vampire Diaries. I liked the theme tune, something which made programmes instantly recognisable back when television was brilliant and while its influences are pretty damn clear, it is an entertaining way to spend 45 minutes.

I was interested to see that a series of novels set in the Class world had been announced but I wasn't going to go out any buy them straight away. Anyway, I was given the set for Christmas, so have sat down and read them in order. Seeing that someone like Guy Adams had written Joyride, I was excited to see how he would tackle the world of Class. And this book is great. Even people who didn't particularly like the television series enjoyed it. I bet that sucked for the haters!

The thing to understand about Guy Adams is that he is a genre author, one of the best. Science Fiction is certainly his thing. Once again, he knocks another book out of the park as this book is very funny and is a good way to whittle away a few hours. I can read really quickly! The one thing I really like is that he comes up with lines designed to blindside you, and he can come up with things that make the characters very relatable to the readers, such as giving a character a big brother that you trust because the reader might have one just like it or describing the joys and pitfalls of being a secondary school student.

Joyride is ultimately about the joys and pitfalls of bodysurfing. And while one consciousness being taken over by another isn't something new, it is fun to read about it here because it fits so well into the setting. Adams manages to ask some brilliant questions about morality and responsibility as events unfold in a very believable way, given the circumstances.