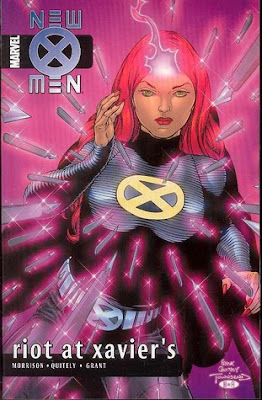 Getting through Grant Morrison's run on The X-Men is a daunting task to think about, mainly because there are a large number of volumes to read and many of the stories are a little bit hit and miss, they can either be very good or very bad, there doesn't seem to be any in between. But if I were to single out on volume of Morrison's run it would be Riot At Xavier's, like the rest of his run, the stories were illustrated by Frank Quitely and Keron Grant. Riot at Xavier's deals with the youth at the Xavier School. Members of the youths have been taking a drug called Kick, which boosts mutant powers and user, powerful telepath, Quentin Quire decides to throw one serious temper tantrum.

Morrison isn't really one of my favourite writers, I have read some of his work from Marvel and DC Comics. The New X-Men would prove to be his final work for Marvel, and this volume is actually quite good. Morrison created characters that have lasted through the X-Men's various comic books since and continue to be endearingly popular. He weaved several stories together in a particularly excellent way, combining Quire's troubling nature, the menacing U-Men who harvest mutant body parts and the telepathic affair between Cyclops and Emma Frost. None of these storylines ever fall flat and get their own moments in the spotlight and you never forget about any of them, even when you are focusing on another.

For me, the artwork isn't brilliant. It is good, sure, but at times, it feels to jarring and unconvincing. Alright, so these are superhero comics, but there are times when you'll forget if your looking at Emma Frost or the Beast because the panels are so inconsistent and it can be very off putting. Quitely's art suits the more fantastical of the mutants, but not people like Cyclops, Jean Grey and Emma Frost. His art isn't the selling point of this volume.

I guess the selling points of these Morrison books is the writing and the story, the characters and the content. Quire is both insane and relatable, he is an amazing telepath but is constantly shunned by the girls he likes and is told he is adopted. All three of those things are bound to make you feel a little insane! Wolverine seems to actually understand this and this is the first example of him being the perfect choice for his future role as the headmaster of the school. There is also a great little camping trip which gives the more fantastical characters some time to shine and lets us look at the darker side of the character, Xorn. He was once really interesting, it is a shame that what did eventually happen, happened.

Looking at the Grant Morrison run as a whole, the stories may not be fantastic all the way through but he created some really interesting characters. And the later impact his storylines would have on the later comics are astounding. Sadly, Morrison's work allows us to see different sides of comic book industries. Morrison isn't afraid to kill off characters or make story's turn some really brilliant twists. But when working with large companies like Marvel and DC, you have to be prepared to have your work reversed. It is so unfortunate that Marvel decided to back pedal this material so hard, when it could have launched the X-Men to some really amazing heights.

If anything, New X-Men stands a testament to show what Morrison can really do with the stories he tells. As much as I may not really enjoy his run, it really was a game changing era for the X-Men and Riot at Xavier's is a damn good read. The book stands out for me because of the stories concerning the younger members of the X-Men. And the storyline concerning superpowers and mutations is surprisingly human, with the typical woes of teenage drama and rebellion...