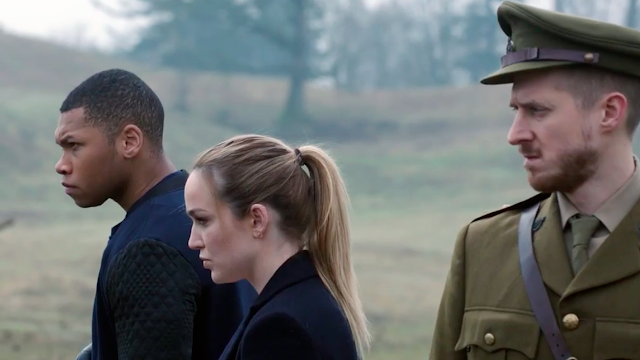 Aruba sees the excellent second season of Legends of Tomorrow come to its conclusion, a time travel caper, so convoluted, that it seems to have taken a close look at the current Doctor Who rulebook!

The problem is that they must limit the interactions with their former selves, something which proves to be a damn problem when they are literally caught red-handed trying to steal it from themselves. It is a good job then that we quickly learn that two teams are better than one as, they do create a massive time-storm, they also singlehandedly defeat the Legion of Doom.

Despite the fact that it was a season finale, there was a hell of a lot of fun to be had, the funniest moment being when the two Mick Rory's locked horns.

It was satisfying to see that it is the Reverse Flash who arranges his own downfall, he goes back in time, collecting different versions of himself from here-there-and-everywhere, without realising that his actions are like cat-nip to Zoom who has finally broken free from the prison that the Reverse Flash put him in.

The best played scene comes where the Spear tries to tempt Sara into fixing her life, preventing her from getting onto the boat with Oliver Queen, getting stranded on the island, joining the League of Assassins and her sister, Laurel's death. The scene is warming to watch with both Sara and Laurel talking about the power the spear wields and how easy it would be to change things for the worst, ultimately Laurel helps her make the right decision, but is the last heroic act of Laurel Lance? I guess only time will tell.

The episode closed with Captain Cold, Malcolm Merlyn and Damien Darhk having their minds wiped and being deposited at the exact moment that The Reverse Flash picked them up from. For Merlyn that is Starling City in 2017, Darhk - Miami in the 80s and Captain Cold - Central City 2016. We get another nice little scene where Cold is sickened by the heroism that Rory showed. Rather than retaliating, Rory tells him that Cold's penance will come in being turned into a hero and sacrificing himself for people he came to call friends.

But nothing is ever simple in the lives of the Legends. Their actions in 1916 lead to another time-quake and they pushed out of the time-stream into Las Vegas 2017. But Las Vegas is different. We now have remnants of prehistoric history, in the form of dinosaurs and the future in the form of futuristic buildings, something which neatly sets up the opening arc for the third season, something which I am eagerly looking forward too...