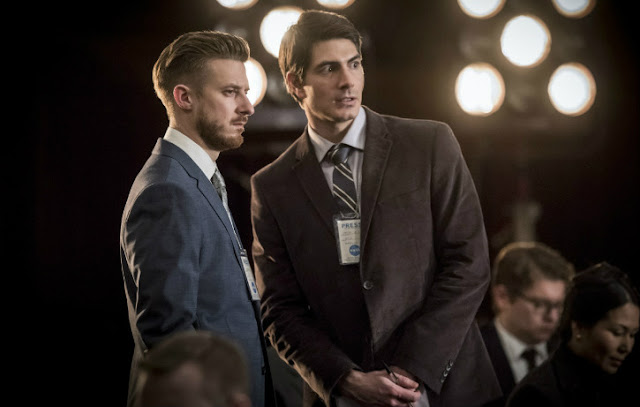 Moonshot sees the Legends travelling back to 1970 in an attempt to recover the final piece of the spear of destiny from the moon!

This episode sees Legends of Tomorrow continuing to embrace the sheer absurdity of comic books with this fun adventure, which the Legends find themselves tangled with the Apollo 13 mission to the moon. A mission, which, in real history, failed due to a technical malfunction but in Legends succeeds to a certain point. The mission also sees them having to reconnect with another member of the JSA, Commander Steel AKA Henry Heywood, who also happens to be Nate's grandfather.

What was nice to see was that amongst the reunions we got some moments for Nate and Henry but some animosity between Henry and Rip, concerning what Rip made him give up. He is the reason why Nate's father was so distant, because he didn't have his father, (Henry), around.

On Earth, Jax, Stein and Mick are hiding in plain sight in the middle of NASA mission control, posing as scientists. In one brilliant moment, Stein and Mick burst into song to buy Jax enough time to flip some important switches. This is the stand out moment of the episode, but what has to be said is that their British accents are dubious, which is really saying something considering the actor who plays Jax is actually British!

Back in space, Sara takes command of the team, leaving Rip feeling a bit like the third wheel, it should make for interesting viewing to see how he adapts to the switch in power in later episodes.

It was fun to see Ray geeking out about being part of the Apollo mission and it was interesting to see the moment actually being played out cheesily, with Rip cheesily grinning and enjoying himself. And it was also interesting Ray having to trust the Reverse Flash as they both try to escape the moon's surface. Given that the lunar module is out of fuel, the two scientists have to work together in order to create an alternative fuel source from the dark matter which gives Ray's suit its abilities, without blowing themselves up in the process.

This episode was a hell of a lot of fun, though still not up to the recent standard that the series had enjoyed. One can only hope it gets that damn good again. But the show is continuing to embrace the comic book side of itself and that leads to some real entertainment. If only Arrow would learn...