Doctor Who: The Pilot - Review 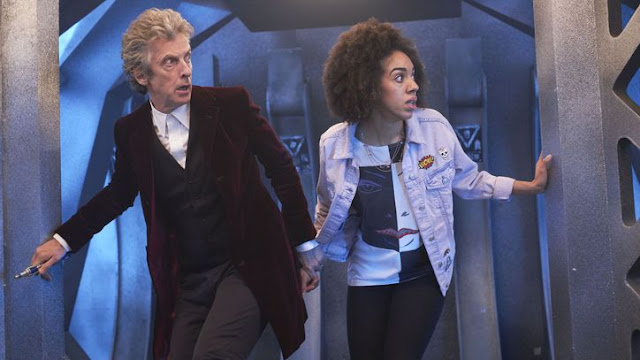 It feels like years have passed since we last saw Peter Capaldi's Twelfth Doctor in action, sure, we had The Return of Doctor Mysterio and his cameo appearance in Class to enjoy, but it has actually been sixteen months since his Doctor was properly up and running! Of course, such hiatuses aren't rare for this show, there was one time when the show was off the air for sixteen years, but this time it was because everyone involved needed some time to get their bearings back. Even the current show-runner, Stephen Moffatt acknowledges this point in the title of the story. The Pilot works as a soft reboot for the show, stripping all the time travel nonsense back and giving us a new companion, for the first time since Clara's introduction in 2013.

The Pilot works in the same way that Smith and Jones and The Bells of St. John did, giving us a new companion in the middle of a Doctor's run. And one only needs to compare The Pilot with Clara's introduction episode to see how much Moffat has stripped back his mannerisms. Bill Potts isn't a mystery for the Doctor to solve, but a friend he takes on board because of the things he sees in her, things which he likes in people.

If the new series has done anything, it has deepened the role of the companion from the stereotypical companions of the classic series, running around in mini skirts and asking questions and has taken seriously what such inquisitiveness says about a particular person and why it has as much value to the Doctor just as much as it helpful in terms of storytelling. Bill's curiosity in attending lectures she hasn't applied for is what first attracts the Doctor's attention and it isn't just that she asks lots of questions. She notices enough about the world and all the bizarre goings on that really heralds the Doctor's arrival. She asks about the TARDIS and its positioning in his university office, she is sharp in a way that all good companions are. 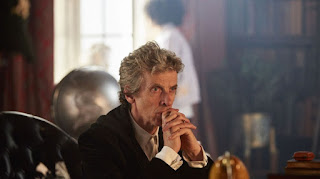 The Pilot also goes back to Russell T. Davies' way of storytelling by introducing us to Bill's home life. Bill's mother had died, like Clara's, as had, in a way, Amy's, which just feels like Moffat is trying to get away from the overbearing mother figures from Davies' run. But the fact that Bill's mother died when she was but a baby is a character point, rather than some big mystery to be solved. Sure, I think we can overlook the slightly wonky characterisations at this point - Bill has a way of saying things her mother said, even though she never knew her but Pearl Mackie's melancholy performance does help us to overlook the situation. The payoff to this scene is when we see Bill going through some unknown photographs of her mother and crying when she sees the Doctor in them, meaning he went back in time to take them in order to give his friend something for Christmas.

The problem with this fact is that, for all inquisitiveness, Bill never brings this point up with the Doctor. She manages to point out every possible inconsistency with the TARDIS, like he is going a new rug underneath it, how it got in the study to begin with, why its name would be an Earth acronym and how alien species wouldn't be able to understand it. When her curiosity makes her one of the best modern companions, it seems a little strange that she decides to let this one point go. Of course, there are ways of explaining this, her snooping around in the strange Vault might have made her suspicious of the Doctor and she might be too nervous to ask too many questions. But she doesn't even make a passing comment to the Doctor about his time-travelling to her mother when she finds out the TARDIS can travel in both time and space. I suppose they were a bit busy trying not to get killed by her dead friend though. These might just be excuses for the show prioritizing a cool moment over character logic - I never said that Moffat had left behind all of his annoying storytelling tics.

While that may seem like a small point, it does speak volumes on how much this episode removed itself from the audience. Murray Gold's music doesn't help, too often he cues our reactions without giving us a reason to come to that conclusion. The opening of this episode is particularly frustrating on this front, with the music immediately signalling how whimsical everything at that moment is. Of course, this point isn't exactly something new, people have complained about the incidental music since the show began, but part of the appeal of this episode is how is shows a stranger the wonders of the universe and that there is so much out there. Starting the show with such arch music doesn't give the show room to allow other aspects to speak for themselves. Actually, the most effective moment of this episode is when Bill first steps into the TARDIS and looks around, the lack of incidental music really drove home how alien the ship was and gave the moment some real sense of impact. The lack of music allows the moment to be powerful all on its own. It isn't that the music never works, when it appears again while the Doctor is talking about the miracles of the TARDIS is seems to be reacting to what he is saying, rather than simply blaring over the scene indiscriminately. 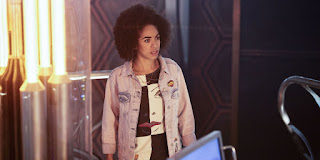 The actual story is fairly rudimental and is very much in keeping with the introductory episode for a new companion. The cleverest trick that the episode gives us is where the possessed Heather is chasing Bill across time and space, which also allows the Doctor to show how the TARDIS works to his new companion, without ever diverting the attention away from the action. Having them travel to Australia was a nice touch, which goes back to the Eleventh Doctor and Clara skipping ahead to the next morning in The Bells of St. John, while the inclusion of the Dalek/Movellan war is a nice little nod to the Fourth Doctor and gives the show a chance to embrace its wider mythos. The actual threat of the story is underwritten, with a super-intelligent space engine oil motivation's, remaining unclear. And writing sentences like that makes you know that Doctor Who is back to form!

Having both the oil and the possessed Heather act as mimics does keep the focus on the Doctor and Bill but Heather and Bill's relationship isn't developed enough in the opening scenes for their climatic meeting at the end to have any real impact. As much as it is cool that Bill is the first openly gay companion that the television show has ever had. and as much as it is cool that Bill's relationship forms the episode, The Pilot just doesn't do the character leg-work for the audience to connect to it properly. The episode leaves it ambiguous as to how much of Heather is under the oils thrall at different points of the episode. Her being withdrawn and probably depressed could be valid, even a great character choice, but Doctor Who has to really make it clear whether something like this is a character trait or a trait of possession. Doctor Who is generally at its best when it makes things like this perfectly clear, even when its trying to be mysterious. The Pilot just felt a little muddled in its storytelling.

However, this is a good, solid introduction to Bill, with Pearl Mackie bringing an energy completely distinct from any other actress who came before her. That she is black, gay and a working class girl is another welcome step in the right direction of the show beginning to show the wider spectrum of us who invest a lot of our time in this show. Matt Lucas's, Nardole, is largely left in the background for this episode, the script seemingly happy enough to leave him as the third person in the TARDIS, refereeing the banter between the Doctor and Bill. Peter Capladi is still brilliant as the Twelfth Doctor, continuing with his warm, if slightly terrifying performance of the Time Lord, which has made all his stories such a joy to watch.

If The Pilot does anything, it gives us some strings to pull as we go along the rest series. Bill is brilliant and the episode offers us some exciting things to come...