Doctor Who: The Genocide Machine - Review 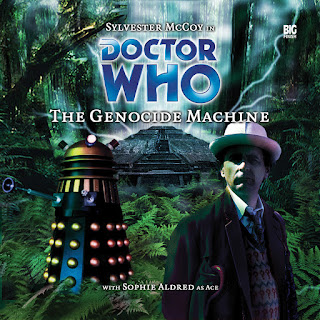 Being only the seventh release from Big Finish, I guess they soon realised that you can't have Doctor Who without the Daleks. They were introduced in the second television story, after all, as well, all the theatre plays, two motion pictures in the 1960s and have been as popular, if not more, than the show that created them. So it made sense that the Daleks wouldn't be far behind in the re-incarnation of the show in the audio format, in The Genocide Machine. In fact, this story is one of four loosely connected stories which were designed to lead up to Nicholas Briggs' new, Dalek Empire range. On writing duty is Mike Tucker, visual effects designer on the television show itself and author of numerous books in The Past Doctor's range of BBC Books. It is a shame then that the story doesn't really work all that well, its enjoyable, but problems behind the scenes, plagued the story. What we end up with is basically a remake of Planet of the Daleks, with some Resurrection of the Daleks thrown in for good measure.

But what the play does deserve enormous credit for is its characters. And for a story with the word, 'genocide' in the title, it is surprisingly humorous! The Seventh Doctor is just as manipulative as ever but when Ace finds he has some overdue library books, he freaks out and sets course for the library he borrowed them from. Sylvester McCoy has always been brilliant as his darker incarnation of the Doctor, he always manages to balance the darker and lighter tones of his character and stories perfectly. But this where Tucker falls short, he has always been good with the comedy. For his novels, Tucker worked with fellow author Robert Perry, Perry was always good at the plots and stories, Tucker the characters. One without the other doesn't really work. And that is never more obvious than in this tale.

Sophie Aldred also puts in a good performance as Ace and the Dalek duplicate of the character. She really manages to steal the show, even with the voice modulator that is used rather excessively for her duplicate character. Also appearing here is Lisa Faulkner as Bev, a recurring character, that many have never warmed too. Though Bev has appeared as a semi-regular character in the Bernice Summerfield plays, here, Bev is a complete rip-off of Bernice. And while Faulkner is a brilliant actress and really gives the role all she can, she will never be Lisa Bowerman, something which it feels the script was trying to make her.

As for the rest of the cast, Bruce Montague's, Elgin, works well as this story's, Henry Gordon Jago and Nicholas Briggs puts in a turn as the mostly silent Prink, who actually gets some of the best lines in the play.

Briggs also performs the Daleks for the first time, (I think), here. He does a really terrific job, even if the voice modulation from Alistair Lock isn't really as good as the originals. But one can overlook this as the way the Daleks find themselves being dispatched is pretty creative and most of the twists which keep the story going, come from them.

The Genocide Machine is a definite step down in quality from the previous stories, The Marian Conspiracy and The Fearmonger. But this was still early days for Big Finish and this tale still manages to deliver a decent story and some truly excellent characterisation...