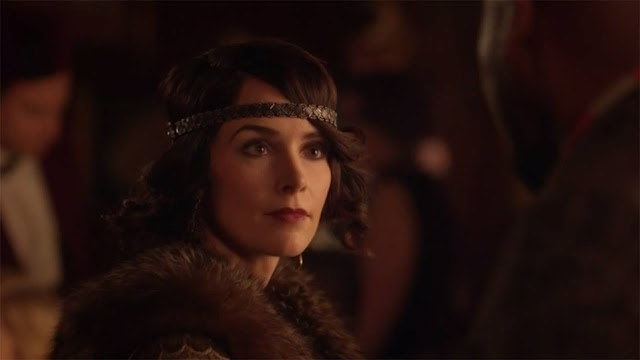 With Wyatt under arrest because of the events seen in the previous episode, Karma Chameleon, The Lost Generation sees Rufus and Lucy on their own when they find themselves sent back to Paris in 1927, on the same day when Charles Lindenburg completed his historic transatlantic flight.

It was nice to see Lucy now armed with knowledge about her familial connection to Rittenhouse, the organisation that the cast has been trying to take down for the past fourteen episodes. And it was interesting to see that her two biggest allies had been taken off the board, Wyatt was being held for questioning, while Agent Christopher finds herself sacked from her role as head of security at Mason Industries when the whole agency is taken over by Rittenhouse.

But our cast of characters don't have a lot of time to mull over the new faces and assess the situation because they are flung back to 1927 with a new soldier called Dave, to stop Flynn from getting to Charles Lindenburg.

Unfortunately, using his time machine, Flynn had gotten there before them and is planning to exploit Lindenburg's familial connection to Rittenhouse.

The episode doesn't worry about rushing things and it feels like a lot of fun as we meet several famous historical figures, Ernest Hemmingway is chasing a good tale and Josephine Baker sings in a club while being generally sassy and we get a brief glimpse at Pablo Picasso.

During their little trip, new soldier Dave manages to get himself killed, leaving Lucy and Rufus dependant on their own devices while leaning heavily on Hemmingway and Baker.

But of course, without Wyatt the team isn't as effective as it could be and Lucy manages to be captured by Flynn. Flynn uses her as a way of getting under Lindenburg's skin and extract information from him about Rittenhouse. The trouble is that Lucy doesn't know that Flynn planted a recording device on her and he uses the new information to go after a different member of Rittenhouse and not Lindenburg.

During the present, things are going equally as bad for Agent Christopher and Wyatt and the pair begin to figure out something of a contingency plan to put a stop to whatever Rittenhouse has planned. Oh, and we got a nice guest appearance from Supernatural star, Jim Beaver as the new head of security at Mason Industries. Overall this was another good, solid episode and a marked improvement on the episode before...