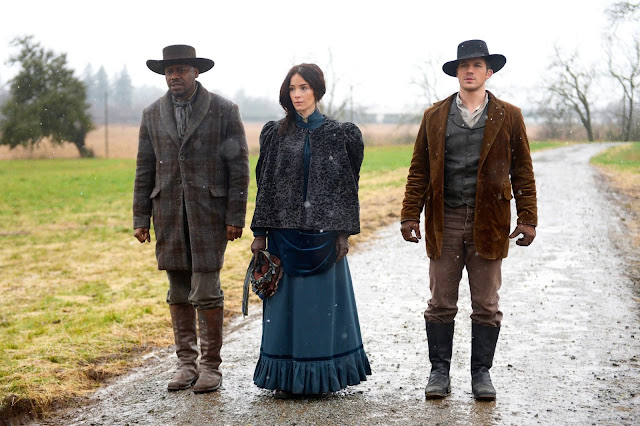 As one might have guessed, The Murder of Jesse James, sees the gang going back to the Wild West, to meet Jesse James, well, they would have if Flynn hadn't got to him first and enlisted his help in finding someone...

So, hot on Flynn's trail, Wyatt, Lucy and Rufus team up with a famous Marshall to bring the fugitives to justice.

This is the reason that Timeless is such a brilliant television show. It gives us yet another historical figure that we don't get to learn about in our history lessons and actually makes us want to know more about them. Did you know that the Lone Ranger was based on real life, U.S. Marshall, Bass Reeves? Well, you do now!

Flynn has travelled back in time to enlist the help of Jesse James to find a woman who went missing from our time. The woman, it turns out, was one of the first pilots who worked for Mason Industries before Rittenhouse got to her. She found out what Rittenhouse was all about and fled through time to escape their wrath. Meanwhile, in modern day, Connor Mason has begun to train Jiya in how to pilot the time machine because Rufus is no longer of any use to him or to Rittenhouse.

It is interesting to see that Lucy, Wyatt and Rufus are all starting to become jaded by their time travelling heroics. Lucy finds herself still pinning for a simpler time when her sister still existed. Wyatt is trying to find a way of bringing his dead wife back to life, while Rufus is understandably, very angry with Connor Mason and Rittenhouse.

This episode was particularly good in terms of progressing character arcs and actor, Daniel Lissing plays a surprisingly good psycho in the form of Jesse James, a stark contrast to the kind of character he had played in the movie, When Calls the Heart. Colman Domingo was also great in the role of Bass Reeves. He was the ultimate lawman in the Wild West with a strong moral sense of right and wrong. (And it was nice to see Tonto turn up, too!)

The episode's revelation about the woman that Flynn had gone to find, gives us viewers a new piece of the bigger plot to chew over and it should be interesting to see what the series does with her in the remaining episodes. (I live in the U.K, we haven't finished the series yet!) And it should also be very interesting to see if Jiya cottons on to the whole Rittenhouse conspiracy or if she falls into the same trap that Rufus did...