Legends of Tomorrow: Season 2 Episode 13: Land of the Lost - Review 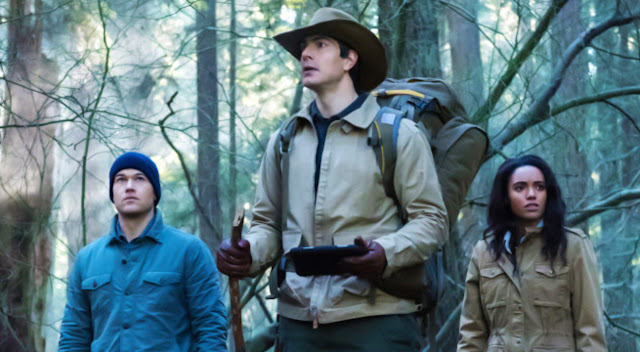 Following on right after the events of the previous episode, Rip manages to take command of Gideon and the Waverider and crashes the Legends into the Cretaceous period.

So with the Legends stranded in the height of the dinosaur age, they all have to act quickly to stop him. And with the ship damaged and Rip still messed up in the head, the team have no choice but to split up.

Sara, Stein, Jefferson and Mick stay on board the ship to try and figure out a way of fixing Rip, using the same Time Master technology which turned Mick into Chronos. This plan involves Jefferson and Sara being mentally linked with Rip, allowing them to enter his mind.

In the meantime, Nate, Vixen and Ray trek across dinosaur land attempting to find a vital component of the Waverider which broke off when the ship crashed. This fun little side adventure sees the relationship between Nate and Vixen developing but as Ray points out, it might be a relationship which is doomed to fail, given that Vixen has seen her future grandchild.

Sara and Jefferson are having troubles in Rip's mind and they find they have to get help from Gideon, now in an avatar form in Rip's mind. Of course, in the end, they manage to find Rip's real self and break the spell they put on him turning him evil.

By the time the episode begins to wind down, the team out in dinosaur land have retrieved the missing piece of the ship are getting chased by an angry T-Rex. But luckily, Vixen manages to get the dinosaur to back down when she communicates with it.

When the episode finishes, Rip is back in charge with Sara as his second in command. It should be interesting to see how that relationship develops, given that Sara has obviously gotten used to being the one in charge.

This was an interesting episode, even if it didn't quite reach the heights that the previous ones have done. Given that the team had landed in pre-history, it was a shame that there weren't more dinosaurs but when you take into account the show has a television budget, obviously that wasn't going to be possible.

However, with that being said, the scene with the Waverider crashing looked brilliant, as did the T-Rex, when we eventually saw it. In fact, the T-Rex will probably be one of the stand out moments from the entire show!

I am looking forward to seeing what the show does with Rip now that he is back, though I hope he does have a few doubts about leading the team after his traumatic experience. One thing I really hope that they don't do is milk those fears to the point of this show becoming a soap opera...