Doctor Who: The Toy - Review 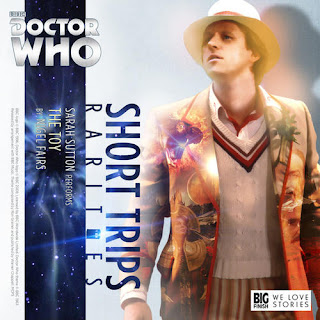 The Toy is a pure gem! A pure gem of a story which will keep you smiling the whole way through!

Of course, it helps that Nyssa is one of my top favourite companions from the show, but even without my slight bias, the brief adventure manages to give us a lot of little nods to the past. It was a shame that before it became one of the initial releases on the Big Finish - Short Trips Rarities - releases that it was so hard to come by. This is one of those stories which would really benefit from a lot of people listening to it.

Because this is done in the Short Trips format, it is an adventure told through the third person narrative and isn't something which is trying to replicate live-action through sound. Author, Nigel Fairs, certainly makes the most of the limited time by giving us a simple enough plot, using time-travel to really delight us with his vivid impressionistic imagery, nightmares and some really insightful thumbnail portraits of classic characters.

For those who don't like spoilers, then tough, everything that happens in this story is displayed on the cover, so I don't mind telling you what happens. Aboard the crowded TARDIS, Nyssa is tired of playing mediator between Tegan, Adric and the Doctor and she engages in the right of all companions and pokes her nose into trouble. At first, she vividly remembers Traken but fans of Nyssa get to learn more about her family in a few minutes of audio than we ever got to learn on screen. But then her nightmares spill out into what appears to be the TARDIS and she is forced to engage in a terrifying adventure.

Sarah Sutton manages to outdo herself in performing several different characters, sometimes all in the same scene. While Nyssa doesn't recognise many of them, fans will certainly have lots of fun picking out who is who. We are also forced to wonder what is real and what is not as Nyssa journey's through this nightmare world.

This is a homage to several different eras that fans will really enjoy, but for people who aren't fans of Sarah Sutton's, Nyssa, might not fins this release enough to satisfy them...