Doctor Who: State of Decay - Review 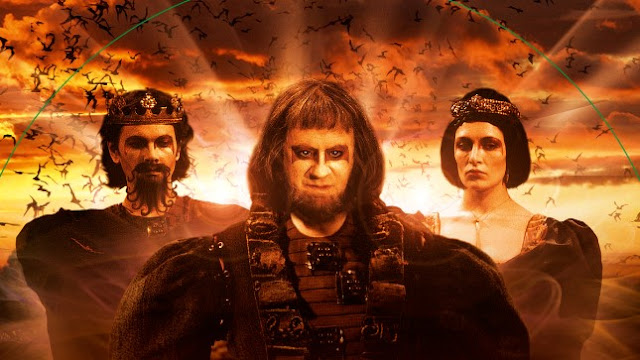 Given that this story was made and shown in 1980, I am really surprised that it had taken nearly twenty years for the show to tackle vampires. I know that Dracula turned up in the William Hartnell story, The Chase, but I mean properly tackle the bloodsucking menaces. They are, after all, arguably the most iconic horror monster of all time.

State of Decay is the second of the three stories which loosely make up The E-Space Trilogy and it is more of a traditional Doctor Who story, from one of the show's master's, Terrance Dicks. It is interesting that Dicks had originally submitted this story in 1977, intending for it to feature Tom Baker's, Fourth Doctor and Louise Jameson's, Leela. It was pulled from the schedule because the BBC was making a television version of Bram Stoker's, Dracula. Luckily, Dicks had also written the story, Horror of Fang Rock, which was produced instead.

Looking at the story from a plot perspective, State of Decay is a standard adventure. The Doctor and Romana arrive on a new planet and encourage the people of a nearby village to rise up against their tyrannical oppressors. This time, the tyrannical oppressors are vampires who use a serious amount of eyeliner! Really, this story has a sense of 'been there, done that', even down to the idea of a primitive society evolving around the wreckage of a crashed spaceship, something the show had already done with The Face of Evil.

Unfortunately, this is another one of those stories which suffer from the shocking visual effects because the producers were too over-optimistic about what the effects departments could actually produce. Seeing a gigantic vampire bat is brilliant in theory, in practice, it is a rather shoddy looking hand puppet which just doesn't look convincing. This was something that the director, Peter Moffatt had obviously noted, given how little of the creature we actually see. Still, the bits we do see are really very bad, maybe it would have been better to not see it and leave it up to the imagination? And don't get me started on the rocket ship used as the stake to kill the vampires.

This is the most energised that Tom Baker appears all the way throughout series eighteen. This is probably due to the actors who portray the vampires are seriously hamming it up, almost to Olympic levels. It may not be gold standard but certainly bronze. And while we are on the subject of bad acting, Matthew Waterhouse is still around as Adric and is still as annoying as ever. Luckily for us, Terrance Dicks had such trouble finding a way to fit Adric into the script the irritation mathematician spends most of the script either acting off screen or asleep in a vampire induced sleep. And these are the only forms of acting he can actually do, so State of Decay is a success because of the lack of Adric, if nothing else...