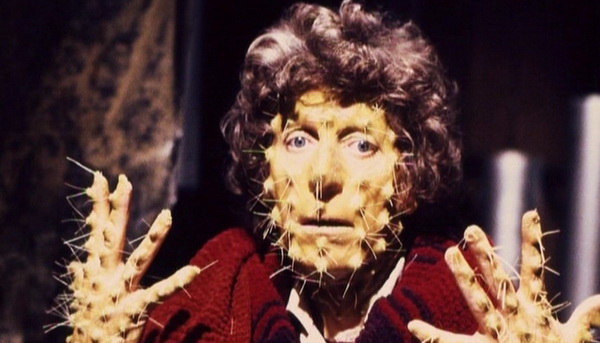 I suppose the main reason that Meglos is remembered in any way, shape or form, is because its main villain is a cactus. Yes, you read that right. A cactus. And a shape-shifting cactus at that. He isn't even have baddie who looks like a cactus, he is an actual cactus, he is even stood in a plant pot when we first see him! And that does beg the question of survival. Just how has he managed to survive when he can't even push a simple button?

This is another one of those dull stories where the characters do nothing but stand around spouting Christopher Bidmead mumbo-jumbo. Instead of the wonderfully witty, if sometimes annoying, banter we had with the Graham Williams era, we get characters staring in the distance saying things like 'Chronic Hysteresis' and 'Dodecahedron', in an overly dramatic fashion. 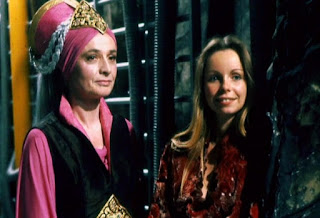 Meglos is nothing more than four episodes of pointless filler for series eighteen, with about ten-minutes worth of plot scattered throughout. The Doctor, Romana and K9 literally spend the first episode inside the TARDIS. And things really don't improve in the second episode either, as our heroes still find themselves stuck in the time loop. Now, time loops are fine for comedy purposes but not so for drama, especially when the solution makes you do nothing but roll your eyes. Episode three is full of your usual doppelganger shenanigans, Meglos is running around stealing things and the real Doctor is looking confused, being arrested for stealing things he hasn't stolen. Tom Baker was once a formidable persona during his era of the show, usually known for his unending enthusiasm, here he looks bored stiff and only slightly less bored as Meglos. It is only when he is playing Meglos that he looks more enthusiastic as he hams it up a little bit more. And even more oddly, the only time he appears to be more like his old self, is when he is playing off against himself.

Poor Lalla Ward seems to be condemned to replaying her role from The Creature from the Pit, as she wanders around a jungle set, being molested by plants and constantly outsmarting Grugger and his goons. Had Grugger and Brotadac been in the right hands, like Robert Holmes, the pair may have been a really memorable double-act. Instead, they are a couple of really hairy imbeciles who you wouldn't trust to replace a light bulb - let alone aid you in universal domination.

And when we are not being forced to watch people repairing a robotic dog, we are being forced to witness arguments between scientists and people of religion, something we have seen time and again. This really is a poor showing from Doctor Who and sadly, even the fact that former companion Jacqueline Hill makes a guest appearance doesn't save it either...