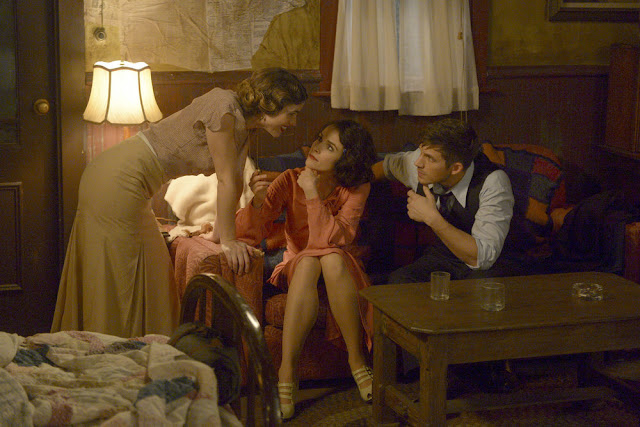 The latest episode of Timeless, for us over here in the UK, sees the team going back to the time of depression in the south of America, where the gang bump into Flynn once again and join up with Bonnie and Clyde.

I was expecting this episode to be a little boring. While Bonnie and Clyde are certainly one of history's greatest love stories, they aren't people that we are taught about in history lessons. Which I guess, is a bit of a shame, because there are some fascinating historical figures that we never get to learn about.

But I am pleased to say, that I was really wrong, I really enjoyed this episode! Flynn is hot on the trail of Bonnie and Clyde, teaming up with the FBI of the day but he is really after the necklace around Bonnie's neck, something which is tied to Rittenhouse...

While Wyatt and Lucy get up in the lives of Bonnie and Clyde, Rufus is caught by the police and questioned because he was at the scene during a shootout between Wyatt, Lucy, Bonnie, Clyde and the police. Flynn recognises Rufus and insists that he is handed over to his custody. But Rufus manages to trick him, giving the police officers a drivers license, which identifies him as Wesley Snipes.

This episode doesn't do too much with the whole Rittenhouse conspiracy, but it does finally allow Agent Christopher to get more involved. She has grown continually suspicious of Conner Mason during the course of this season and this seems to be coming to something. But it soon puts more pressure on Rufus when they return to present day.

The settings were fantastic, as where the costumes and the old, old cars, all of which were used to give us a pretty damn accurate depiction to the 1930s American South!

And Jacqueline Byers and Sam Strike were brilliant in the roles of Bonnie and Clyde. The scenes which showed them as kind and their bonding with Wyatt and Lucy were just pure brilliance. Everyone involved should feel proud.

However, although I said I enjoyed this episode as a whole, there were a few moments where I found myself zoning out, the scenes were a little too slow for me, it was brilliant to see Bonnie and Clyde in a historical setting, but some of the scenes caused me to zone out, something I hope doesn't happen again...