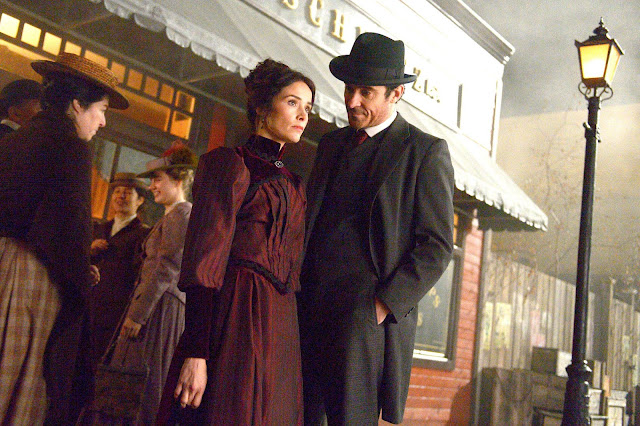 Following on from her kidnapping at the end of the previous episode, Lucy finds herself in a dire situation. Flynn brings her to the Chicago Fair of 1883 and in their pursuit of Lucy, Wyatt and Rufus fall foul of a sinister trap...

The World's Columbian Exposition wastes no time in continuing the action picking things right up from the previous episode. Lucy had refused to allow Flynn to kill the young Rittenhouse when he was a child. Obviously, this makes Flynn angrier than usual, given that his wife and child will still be dead in our timeline. Wyatt and Rufus resolve to do anything to get their friend back, not matter what, which leads Rufus to tell Rittenhouse where to stick it.

This episode also includes two historical figures, the great escape artiste, Harry Houdini and America's first serial killer, H.H. Holmes. John Johnstone put in a particularly satisfying performance as the deranged Holmes, while Michael Drayer was great in a kind of double act when he was paired up with Abigail Spencer's, Lucy Preston.

This episode also continues to allow the groups' bonds to grow and allows Lucy to have the opportunity to save Wyatt and Rufus's lives for a change, with a little help from her escape artiste friend, of course. First she has to find a way to break away from Flynn, but I'm sure that when you are with Houdini, anything is possible. Setting the story in the World's Fair was a nice touch and Flynn's move to trap Wyatt and Flynn in Holmes' hotel, was a particularly sinister move on his part.

Other notable historical figures featured or mentioned in small cameo's are Thomas Edison, Henry Ford, Roosevelt and J.P. Morgan. But the main bulk of this story was lifted by Houdini. One feels that the only person missing from this episode was Arthur Conan Doyle, but giving the series a Sherlock Holmes connection might have come across as a little tacky.

With the possibility of a second season still up in the air, Timeless is still delivering strong and pulpy storylines, well, for us over here in the U.K, where the show is still airing. Alright the series takes some liberties with the science and history behind it but the storyline with Rittenhouse is managing to keep things interesting on a much deeper level...