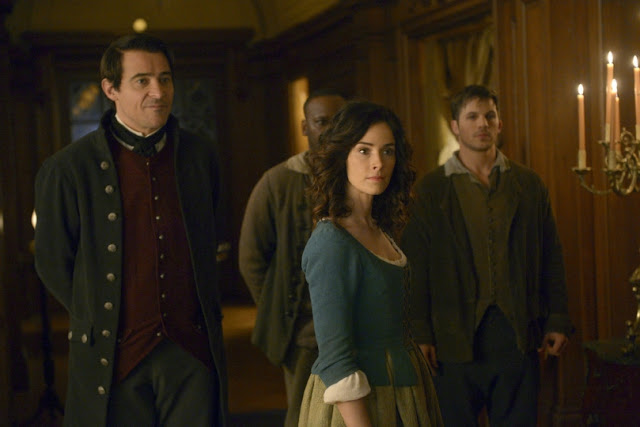 This episode of Timeless lets us get pretty close to ground zero in terms of Rittenhouse action. But it does a very clever thing, once we think we know everything we need to know, the writers pull the rug out from underneath us as the team think they have figured everything out.

The first interesting thing about this episode is that Lucy, Wyatt and Rufus are pretty much forced into a alliance as they have to try to capture the traitorous Benedict Arnold. In the previous episode, Flynn had managed to obtain a note via the group's encounter with Bonnie and Clyde, the note has been handwritten by Arnold and reveals he has a deep connection with Rittenhouse.

And as we are taken on a trip, deeper into the rabbit hole, we learn that Rittenhouse never was an organisation but a person, which of course leads Flynn to the conclusion that he must be killed. By his powers of persuasion, something he achieves without the use of his fists, his sells his unwilling allies on the idea and all appears to be well and good, until we find that Rittenhouse has a young son. This of course, leads Flynn to try and kill him too.

This episode offers us a lot of twists and turns and we are yet to discover the repercussions on the future from the gang's actions in the past. But it looks like we will be stuck in the past for a while as a seriously ticked off Flynn takes Lucy hostage which means that the next few episodes will probably see Wyatt and Rufus tracking her down and rescuing her.

The whole Benedict Arnold aspect of this episode played in nicely with everything else we have learned about Rittenhouse so far. And the episode's setting was a great way for us to meet George Washington in a time before his eventual presidency.

I also have to give a shout out to Goran Visnjic, who gave a brilliant performance as Flynn in this episode. Flynn is so obsessed with getting rid of Rittenhouse that he would even resort to murdering to a young child. This aspect of the episode was written in a really clever way, it does make a weird sort of sense, especially as we know who the child might grow up to become. He had just seen Flynn murder his father, there is no telling what something like that does a child. It isn't above reason that he might want to get a little bit of payback.

All the timey wimey bits of this episode have yet to be explored in the present day. But just from this episode, I can't wait to find out how the past may have changed the future this time...