Doctor Who: The Power of the Daleks - Review 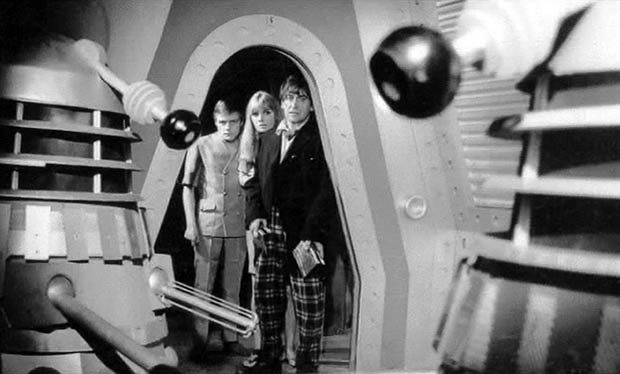 Doctor Who was never, never, meant to be a television institution. It was never meant to still be going 53 years later, never meant to be retelling fundamentally, the same story it began all that time ago in 1963. But the show's stars, writers, producers and directors, took it so seriously from the start and that is such a big part of the show's success. But I doubt they knew they were making something so ephemeral, an entertaining part of Saturday night. But that doesn't explain why the BBC decided to destroy hundreds of episodes of television, not only from Doctor Who but other shows, denying us the pleasure of viewing them today. No missing Doctor Who story is as legendary in the mythos as The Power of the Daleks, which featured the debut of Patrick Troughton's, Second Doctor. Power has often been named by a generation of fans as the best Doctor Who story of all time and because of this, fifty years since its transmission, the BBC gave us a way to see this classic, they animated it to the original soundtrack. The result is half 1966 and half 2016 with the viewer left to wonder whether the new reconstruction ultimately reveal or obscure the original material.

Set immediately after the aftermath of William Hartnell's swansong, The Tenth Planet, The Power of the Daleks takes the new incarnation of the Doctor and his companions, Ben and Polly to the planet of Vulcan, no relation of the planet in Star Trek, where they soon find themselves embroiled in a deeply petty power struggle between a colony's government, a group of rebels and a would-be-authoritarian usurper. A sudden murder manoeuvres the enigmatic Second Doctor into the role of an official from Earth. He uses his newfound position to investigate the colony's research into what their scientists take to be a group of lifeless robots, who the Doctor soon recognises at the Daleks. Without their power supply, the Daleks are forced to bide their time and pretend to serve the colonists, all of whom are so self-absorbed they believe that the Daleks are anything but scheming and manipulative conquerors.

The original series of the show, particularly in its black and white form, tended to be quite a slow moving affair. Some of that is due to the viewer's shift in sensibilities and some of it is down to the fact that The Power of the Daleks was never intended to be watched in one long go but over a period of six weeks. Even when you allow for these factors, this story can feel monumental when it starts out and this is where the new animation can do the story some favours. The, understandably, low budget restricts the character's movements and expressiveness. This is much less of an issue once the story gains some momentum and the characters start to argue with and plotting against one another, but the first couple of episodes rely on a subtler, almost non verbal performance from the whole cast. 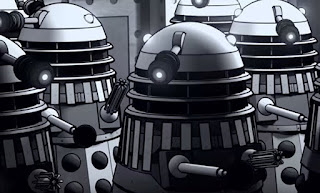 Indeed, one can't argue that the animation have previously filled in the missing pieces from Doctor Who stories, liked The Reign of Terror and The Moonbase. But this is the first time a story has been animated in its entirety. Sadly, the animation will never be able to capture the expressiveness of Troughton's face and body language, nor will it capture the little bursts of energy he had which made his incarnation so captivating to watch. And the lack of surviving episodes will make it far too hard to allow us to see what this looks like in the context of his debut. Of course, the fan's familiarity with the character should make it easier to imagine some percent of how he would have acted but the same can't be said for the more obscure companions, in the form of Ben and Polly. Both of these characters are amongst a few who were worst hit by the great BBC culling. But to help them both, the performances of the animated supporting cast are necessarily flatter than they originally were.

This is nowhere near a fair representation of The Power of the Daleks, but it is the best we fans are probably ever going to get. We can only guess at how accurately the animation gets the story's costumes and sets but there are a couple of examples of wonky staging that might be a faithful recreation of something that happened in the original or a sad mistake in the animation. Doctor Who tends to be talky and stagy but in animation form, these factors are dialled up to eleven. The animation is effective when the narrative needs to benefit from minimalism, especially during the action sequences. But one thing that really looks great is the sleek design of the Daleks. The limitations that the animators must have had to faced, of course make them vary to how original director, Christopher Barry had shot them in 1966. But both efforts get a lot of something which was so little, offering us a sense of unity despite the divergent formats. 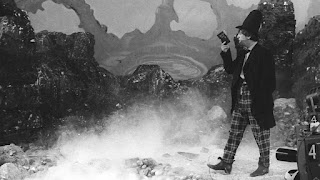 What shines the most about this story is the excellent script from the hands of David Whitaker. This really is a bleak tale about the petty ambitions of petty humans and the venality that blinds them from the real threat to their home. We have a scientist, who is convinced his intelligence is superior enough to control the Daleks, a governor who sees the Daleks as a way prove their colony's self sufficiency to Earth. There is another government official who sees them a cog in his power grab. The other characters brilliantly believe themselves to be the stars of this story, but their squabbles are nothing more than collateral damage in the Doctor's latest battle with the Daleks. It almost feels as though Doctor Who reasserts itself over the course of this story, which is a nifty little parallel to the Doctor rediscovering himself.

It is no lie to say that The Power of the Daleks occupies a really unique part of the show's mythos. Nowadays, the idea of swapping one Doctor for another is an old trick. But it is hard to imagine how odd the notion must have been in 1966. Troughton's Doctor does make a few needed concessions to the audience and his equally uncertain companions, as he spends much of this story running around like a madman spouting gibberish. But a weird kind of logic behind his actions does eventually begin to emerge, though the Doctor does remain a remote figure. This is the one Troughton story which doesn't feature his definitive companion in the form of Frazer Hine's, Jamie McCrimmon. This doesn't help when it comes to making Power feel connected to the action that usually accompanied a Troughton tale. One is forced to wonder if this is a story which would have always felt a little out of time, even if it had survived. Animation can do nothing but capture a mere shadow of what made this story special in the first place, but even a shadow of a story like The Power of the Daleks is well worth seeking out, made all the more remarkable because of the form of its resurrection...