Doctor Who: The Fearmonger - Review 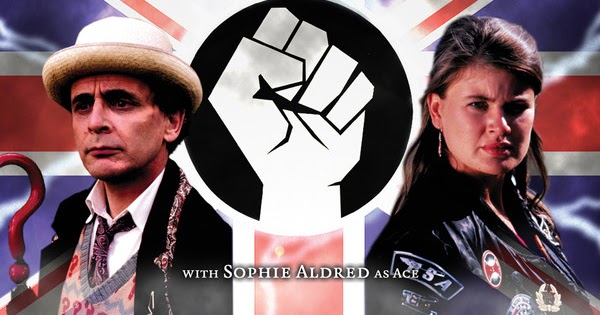 In 2000, Big Finish was just beginning its, to date, 16 year journey into the world of Doctor Who. The Fearmonger was written by popular New Adventures novelist, Jonathan Blum and it was to be the first proper Seventh Doctor audio adventure. And despite having been released 16 years ago, The Fearmonger is more relevant today than it was back then...

What is brilliant is to hear how easily both Sylvester McCoy and Sophie Aldred slipped back into their roles of the Seventh Doctor and his companion Ace. More than a decade had passed between the final adventure for the classic series, Survival and this release. One would never guess that for their performances here! McCoy's Doctor comes across strong and with plenty of authority as he walks in and out of situations where he has face down people with different means and motives. Aldred comes across even better than she did on television as an older Ace, someone who grown on her travels with the Doctor. She is more mature as she tries to play or manipulate the Doctor like he had once done in The Curse of Fenric. Clara Oswald has once done a similar thing in the most recent series'. But the results are different and she pays the price for her troubles, as she gets shot at the end of part two. Both McCoy and Aldred bounce off of each other wonderfully, thanks to the chemistry between the pair and the brilliant material they have been given. Both characters get some brilliant moments, particularly in episodes 3 and 4.

McCoy and Aldred are aided by a great supporting cast. Jaqueline Pierce, best known for her role in Blake's 7, once again gets to play a sinister character in Sherilyn Harper, an extreme right wing politician whom much of the story revolves around. Harper's right hand man comes in the form of Hugh Walters, playing Roderick Allingham. Walters too, is sinister, he is menacing while giving his more restrained performance. Fighting the extreme pair is Mick Thompson, a loud mouthed radio host played by Aldred's real life husband, Vince Henderson. Thompson seems to thrive off of the chaos that Harper and Allingham managed to generate. The real threat of the play though appears to come from Jack Gallagher's, Alexsandr Karadijc, who is the leader of a terrorist group which is not what it appears to be. And Mack McDonnell as Walter Jacobs makes an appearance, whose character holds a special meaning to the title. Oh and Ace's old friend, Paul Tanner, played by Jonathan Clarkson, gets pulled into the mayhem. They are a solid supporting cast who compliment the main cast well.

There is a lot about The Fearmonger to recommend. Its main selling point is that it is written by Jonathan Blum, someone who was always reliable in The Wilderness Years as someone who could deliver a solid story. Early on in their history, Big Finish would recruit writers like Blum who were known to readers of the Doctor Who novels in publication during the years it was off air. However, problems behind the scenes would lead Blum to never write for Big Finish again. I heard he had some kind of breakdown while writing this story, how much of that is true, I don't know, its just what I've heard. But the story not only captures the feeling of the later serials from the end of the television series but the darker tone of the New Adventures range of novels which were designed to carry on the story of the Doctor after Survival. There are enough twists here to keep the listener interested throughout its two hour length, particularly around the cliff-hangers.

But The Fearmonger has one great flaw. The story which does have some science fiction elements, is largely a political thriller. If one removed the science fiction elements and the monster then the story would work brilliantly as a political thriller which is obviously what it is trying to be. Overtly making the story political makes the science fiction elements not work and they feel out of place because they have so little to do with the overall plot. The story should have been done like one of the historical adventures from the 1960s with the Doctor and his companions arriving at some historical event and getting caught up in events before finding the TARDIS again. But this is hindsight which we have been granted listening to it 15 years after it was written and recorded. It is hard to really look at this as a real problem as the story does have more of a staying power than many of the early Big Finish releases had.

The Fearmonger feels particularly relevant today, especially in this country, because of the British Nationalist Party existing and our leaving the EU and worry about what will happen. Both of these issues are troublesome in 2016, in 2000, The Fearmonger didn't have near as much resonance as it does today...