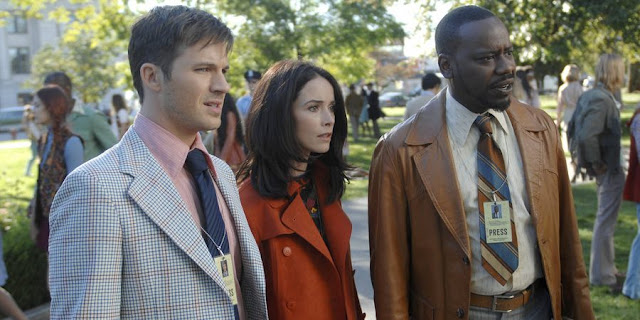 The team are sent back to the 1970s to uncover the truth being one of the biggest political mysteries of all time, but the mystery is already solved by the time they arrive. Flynn has managed to get hold of a copy of the Watergate Tape in Richard Nixon's Washington. When Rufus and Lucy find themselves put on an investigative course that leaves them both rattled to the core, Wyatt finds his tragic past erupting and finally, the secrecy behind Flynn's plan begins to unravel.

Finally, we are getting somewhere concerning the Rittenhouse Conspiracy! It is revealed that they are what is mentioned in the historic missing eighteen minutes of the tape which brought down Nixon. Of course, Flynn has the tape and he manages to kidnap Rufus, Lucy and Wyatt but lets Rufus and Lucy go to find the mentioned document on Rittenhouse. Rufus is still struggling with his conscience, finding himself having to report to Rittenhouse in the 1970s while also trying not to spy on his friends. But when his and Lucy's investigations collide, he has no choice but to come clean.

This is an episode which takes a number of great twists and turns, as it involves not only Rittenhouse, but the Black Panthers too. Rufus manages to infiltrate them under the name Kanye which was a bit of a giggle as his undercover name is ridiculed by the panthers, who believe his is a police officer.

Rufus and Lucy's investigation leads them to a Doctor of History, who just so happened to study under the same person as Lucy did. According to Flynn, this Doctor holds the information which will threaten Rittenhouse, though we never get to learn what that information might be. But it doesn't really matter as Rufus and Lucy use this Doctor as a way of pitting both the forces of Rittenhouse and Flynn against each other, allowing them all to escape.

With all the team's secrets laid out, Wyatt isn't the happiest of bunnies. But he remains on board out of obligation rather than anything else, telling Rufus to continue spying on them for Rittenhouse while they pretend everything is normal.

The final moments of this episode see the team returning to the 21st century and Rufus is riding along in a car with both Conner Mason and the guy from Rittenhouse. Immediately, the Rittenhouse guy suspects Rufus of holding back information but he of course has no proof. But it is left clear that Rufus is going to have to tread very carefully, especially since Rittenhouse has now threatened him and his family.

And finally, Lucy summons up the courage to see her real father, only for him to turn out to be the Rittenhouse guy! What?!

Using Watergate in conjunction with the Rittenhouse conspiracy was an inspired move, which made for a really interesting episode. One highlight was Flynn using future Lucy's diary to grill Wyatt. And it finally does look like we are being allowed to see the reasons why Flynn is doing what he is doing. What is interesting is that the creators are now making it look like the team will soon side with Flynn, which would be great to see.

Sure, this episode is one you probably need to watch a couple of times to see each character's point of view and to allow yourself to see everything in context. However, I do think there was a lot of juice left needing to be squeezed from the Watergate storyline, this historical aspect wasn't as well developed as they have been previously. It really is the type of story that needed a second episode dedicated to it, everything was pushed into one 45 minute episode and while it did work, it wasn't very well developed. And that is a shame...