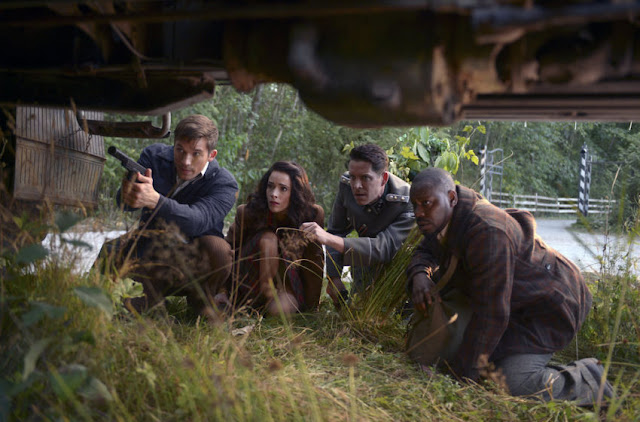 This is the episode that sees the inevitable trip to Nazi Germany where they are tasked with preventing Flynn from handing nuclear weapons over to the Nazis, following on from last week where he stole a nuclear core. But that it was we are told to assume he is doing.

Their main mission however, is to protect the scientist, Wherner Von Braun. As we know, Von Braun would go on to be a huge asset to the United States' space program. But he never faced punishment for the atrocities he participated in during his involvement with the Nazis. But Von Braun isn't the only historical figure the team meets, they also come face to face with Ian Fleming, who was a spy at the time and would one day go on to write James Bond.

This was an incredibly fun adventure, playing out more like a caper, than a spy mission but it manage to provide some interesting and funny moments with the inevitable James Bond references at the end, there was even a fun little variation of the Bond theme. One of the fun moments concerns Rufus asking Fleming how he can be comfortable as a spy, pretending to be someone he isn't and lying to everyone. We also get some nice character development, particularly from Wyatt who helps Lucy come to terms with her anxiety by telling her the reason he joined the military and why he keeps on fighting. This helps tie in nicely with the end of the episode where Lucy decides it is her sister, who was accidently erased from the timeline, is who she is going to fight for.

What this episode also gives is are a couple of nice references to what Rittenhouse is. And although it is still unclear as to what Flynn actually has to do with it and why he wants it brought to an end, it is suggested that Rittenhouse has some effect on US policy for years, which is why Flynn was all for handing Von Braun to the Russians.

At the end of the episode, Rufus once again tries to get out of conspiring against his teammates. But his boss, Mason Bridge reveals that he is in too deep with Rittenhouse and pleads with him to stick with it, for his sake as well as Rufus'. And if the scene at the end of the episode, with the car pulling up on Rufus, then I would guess that Flynn is right in his need to take Rittenhouse out of the equation. Especially when they manage to strong-arm Rufus back into line by threatening the lives of his friends and family. But the question still remains, who are Rittenhouse and what is their ultimate goal. I guess we will have to stick with it. And we get a nice performance from Sean Maguire as Ian Fleming...