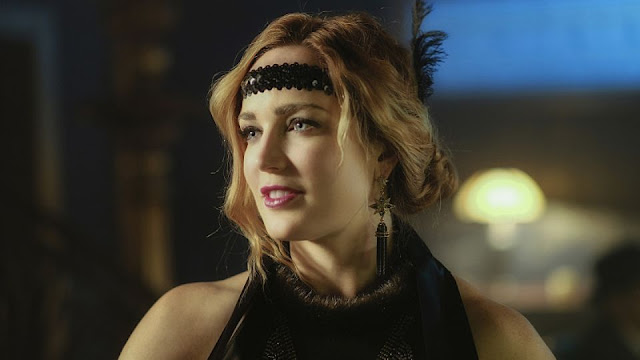 The Legends have chased another time aberration to Chicago in 1927 and they soon come to realise they have been set up in a trap conducted by, Eobard Thawne, Damien Dahrk and latest member of the forthcoming Legion of Doom, Malcolm Merlyn.

But in the background, they are aiding gangster Al Capone in his underground war. So legends decide the best way to stop them is to aid legendary FBI Agent, Elliot Ness.

It is nice to see the relationship between Heatwave and Vixen getting explored but it was even nicer to see Wentworth Miller return as the ghost of Captain Cold. And it was a lot of fun seeing Mick getting to out-gangster Capone's henchmen and Vixen does make a great bad girl.

This episode also took its chance to pair up Professor Stein and Sara. Their scenes culminate in Stein being forced to tell Sara about his daughter, someone he had never met before the Invasion storyline. It was evidently a hard thing for him to do as Sara holds Stein in such high regard. But Sara tells him that his daughter isn't a time aberration but a living, breathing person, she is his daughter.

The costume and design departments also outdid themselves as the period dress and cars looked fantastic. It does make you wonder though how much of the budget was spent on this episode alone and if it might effect the season somewhere down the line.

If I had one problem with this episode, it would be that there were far too many villains. While the addition of John Barrowman worked, it meant that Damien Dahrk got relegated to the side-lines while Merlyn and the Reverse Flash get to have all the fun.

And it was nice to see the friendship between Steel and The Atom. Their friendly rivalry is getting more ridiculous sure, but it is lots of fun. And at the end of the episode, all that was once wrong was put right again and we got a nice teaser for the next episode, coming up next month here in the UK. Finally, we will see the return of Rip Hunter, though he won't be anything like we remember him if the final scene is anything to go by.

While the series is now scaling new levels of ridiculousness with each passing episode, this is one of the reasons why I'm going to be sticking around...