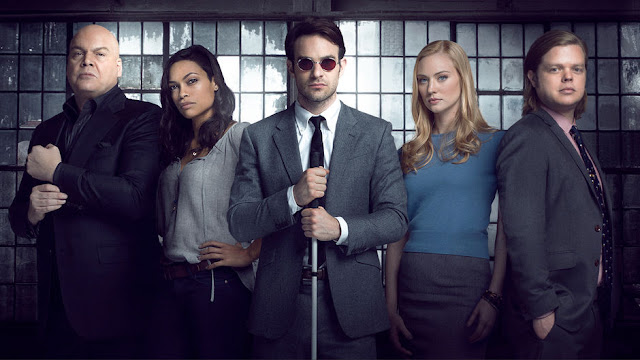 Daredevil was fun. Period. It was a brilliant ferocious look at Hell's Kitchen's vigilante hero. Similar to how Arrow treats Oliver Queen, Matt Murdock simply loves his city. Hell's Kitchen was part of New York which was hit very hard by the Chitarui and Loki attack during The Avengers. Indeed, this is the only blatant reference to the wider Marvel Universe and this is a clever move as it allows Daredevil to really stand on its own two feet. During the 1960s/1970s run of Daredevil comics, Hell's Kitchen was portrayed as an Irish immigrant-heavy neighbourhood that was crime ravaged. But it was full of people who were mostly good people living in hard times. This show doesn't really change that, it just links it to The Avengers and gives it a modern twist. And this is a smart move which ties it to wider universe, despite the obvious fact that this show is darker and grittier than anything else Marvel Studios has created.

The series is stuffed with strong, grounded performances, smart writing and hard hitting fight sequences which really helped to elevate Daredevil above fan's expectations which, given this was a show about this popular character, was really quite high. Creators Drew Goddard and Steven S. DeKnight gave us a taught, thoughtful and appreciative look at Matt Murdock, who is one of Marvel's most complex characters, as well as one of their most religious. Plus, he was hero that no movie which ran to 120 minutes would ever be able to do justice with.

Vincent D'Orofrio's performance as Wilson Fisk - AKA The Kingpin - was something which served the show well, and the strong focus on his character helped to differentiate his villain from the gaggle of others. It was very important in the grand scheme of things for Fisk to be played as a vulnerable man. Albeit, a very dangerous one, but he was a character who came with his own very complex and important backstory and a current web of lies and betrayal. But he also gets his own love story, Fisks' early moments on the series see him wooing and doting upon gallery curator Vanessa, played by Ayelet Zurer and it was a very daring way to introduce him. But it was a dare which paid off. Especially given that Fisk had spent a few episodes off screen being built up as the bogeyman. Simply put, D'Orofrio's performance was one of the best things about this series. He really understood that Fisk was someone who was learning how to speak with people every time he opened his mouth and his shyness and awkwardness helped to separate him not only from crime boss clichés but also aided the viewers in understanding why a man as isolated and lonely as he is was so lethally attached to Vanessa. He also saw Wesley as his best friend, even this was never confirmed on screen, there were multiple times when Fisk referred to Wesley as such. While they do have a bond, I think it is a case that Wesley is probably the closest thing Fisk has ever had to a friend, not a best friend.

And Charlie Cox was no slouch either. Matt Murdock was constantly wrestling with how far his vigilante crusade should go and Cox handled the matter with care and relatable concern. Even the act of killing was a case of soul searching for Murdock. Matt was willing to main, incapacitate, wound, torture and knock people in comas, even on a few occasions threatening villains with death and not saving them from life threatening injuries. It really was enough to think that this world would weigh heavily on the consciousness of a devout catholic, while giving a 15 rated look at the world he inhabits. It is the beatings that Matt gives out and on occasion receives that make this world stand apart from the movie universe.

The supporting cast was brilliant too. What I particularly liked and appreciated was that the show didn't so a soapy love triangle between Karen, Matt and Foggy. There was some flirting sure and some seeds planted here and there for future storytelling, but the show seemed resigned to politely wave as the opportunities rolled past. Karen Page, played by Deborah Ann Woll was certainly no ones prop. And she didn't seek comfort in the arms of others. She was someone who was willing to fight back with anything on her level which was available. And Elden Henson seemed all to ready to be on hand as Foggy Nelson delivering a mixture of humour and drama which was nice to see. Praise also has to go out to Rosario Dawson as Claire Temple and Vondie Curtis-Hall as Ben Urich. Claire Temple isn't a character who has had much interaction with Daredevil in the comics but the story made both characters important in the grand scheme of things and they were both given interesting and surprising treatments.

Of course, I couldn't really talk about Daredevil and not mention the fight sequences which were nothing short of amazing. Most fans seem to content to just rave about the sequence featured in episode 2, Cut Man, which gets its fame for a reason by the way. But there are some great sequences littered throughout the season but I think it is the fact that Matt takes quite a beating along the way which gives them some extra oomph. It manages to really draw you in when you can almost feel how hard it is for Matt to face down a few squads of thugs. And it works really well when it feels like each punch he takes, you can almost feel.

The only fault I have with the first season is that it builds itself up and up to the delightfully shocking ninth episode and then loses steam. Alright, following on from the events of the previous episodes we needed some time to recover, but the time we were made to spend recovering went on for a little too long. While the final manages to pull everything together very nicely, the best of the show was sadly behind it, back in the opening and middle acts.

So, Daredevil may have spun its wheels a little in the final act while it was trying to figure out its own endgame. But it was thrilling overall. And it was a really satisfying love letter and tribute to the Daredevil comics and lore. A live action take on Daredevil has finally succeeded where others have failed. He had once appeared in The Trial of the Incredible Hulk and the bad movie in 2003. But what is it they say? Third time's a charm...
Charlie Cox Comic Books Comicbook Comics Daredevil DC Comics Foggy Nelson Karen Page Marvel Marvel Comics Matt Murdock Netflix Review Stan Lee