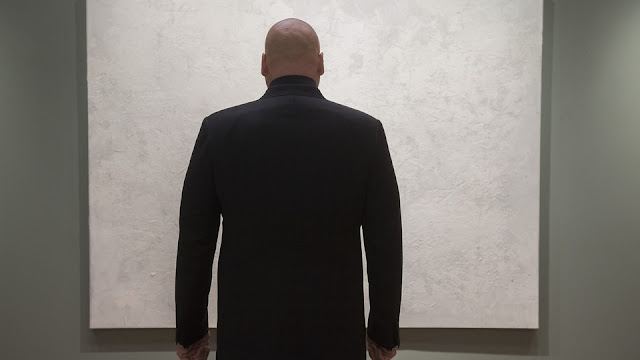 The thing we learn from this episode is that, in the criminal justice system, people get intimidated by two different but important groups. You have the criminals, who threaten and blackmail everyone they can get their hands on, so you can get away with murdering someone with a bowling ball and then there are the vigilante lawyers, who beat up the criminals so they can't get away with a bowling ball related murder. These are their stories. And that is the lesson we can take away from this episode.

Given that Matt Murdock and Foggy Nelson are lawyers, it wasn't going to be long till we got a court room scene. What I didn't expect was them to be defending on the Kingpin's henchmen. The henchman in question was trying to claim his assassination, using a bowling ball incorrectly, (no it isn't something one can use to smash people's head in with), was an act of self defence. We don't see the whole trial, thank god, just the beginning and the end. But it wasn't the best opportunity to see how Foggy and Matt function in a courtroom, though we do learn that Matt can give a damn good argument with the best of them.

And despite his ability to circumvent the law after dark, Matt is still someone who believes in the letter of the law and will only defend someone he knows to be innocent. There was no way he was going to stand in front of a jury and tell them his client was innocent when he knew, beyond a shadow of a doubt, he wasn't. So he really walks a very fine line with his closing statement, telling the jury outright that his client was a killer but should be acquitted because the prosecution failed to prove that he didn't indeed act in self defence.

Yes, James Healey wasn't someone innocent, the state was just unable to prove he was a guilty man. But this was Matt's first indication that his big villain was really powerful and influential. They had probably managed to arrange the outcome of the trial before Wesley walked into Matt and Foggy's office. But at least now Matt knows the name of who is at the top of this series' criminal food chain. And their law firm gets some much needed revenue. There was none of the stupid, I'm too noble, rubbish. They took the check and cashed it in. Nelson and Foggy might be goodies but they still have to pay the bills like everyone else.

Given that there was lots of scenes taking place in courtrooms, boardrooms, interrogations and offices, this was quite a talkative episode, though it was bookended by two exceptional fight sequences that result in a gruesome suicide that leaves Matt visibly shaken. But describing this episode as talkative, might make it sound like a criticism. But it is not when the dialogue in these scenes are this well written. Take, for example, there is a scene which introduces fan favourite Daredevil character, Ben Urich, played brilliantly by Vandie Curtis-Hall. It was a terrific two-header between two veteran soldiers of declining empires, the media and the mafia, as they chat away about the new world order against the backdrop of the Manhattan skyline.

The mafia man is smart enough to see which way the wind is blowing, his is aware that his type of criminal, who send flowers to the wives of those he murders, is a species which is going extinct. For him, it is time to pack his bags and head somewhere with a bit of sun. But Ben is one of these older people who refuse to believe that the old days are over. His editors aren't interesting in the stories he is writing unless they can increase the papers' circulation. I don't usually care much for newspaper writer storylines, especially in series' which deal with crime like the type he wants to report. But I do hope that Daredevil will keep it interesting, I like Ben and I have a feeling that I will care about what happens to him. What I wasn't impressed about though was his b-plot concerning his wife, which felt like the exact comic book cliché that this show was trying to avoid.

Ben Urich doesn't strike me as the sort of person who will just let the Union Allied lead go. And since the assassins have failed, Union Allied have called in the big guns - lawyers - to deal with Karen Page. What follows is a scene where they write a very large check in exchange for her silence. Karen decides to sign their papers but Karen is too much like Ben and Matt and can't let things go. A good man was murdered in her apartment for which she was framed. And she believes that those responsible can't and shouldn't get away with it, no matter who gets hurt on her quest for vengeance by revealing their identities to the world.

And this episode we finally get to see who is pulling the strings of the criminals in Hell's Kitchen. The reveal is the kind of unexpected move that Daredevil is quickly becoming very good at, it reveals Kingpin not in a moment of strength but a moment of vulnerability. And just going by this quick scene it is very obvious that Vincent D'Onofrio's, Wilson Fisk - AKA Kingpin - isn't going to be you typical baddie who twirls his moustache. I really look forward to seeing more of him...