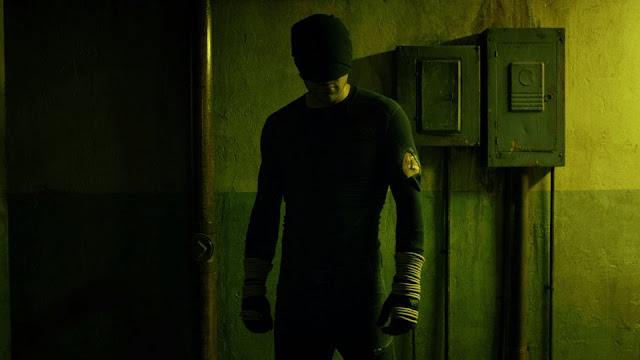 I think the best way to review this episode, is to talk about the ending first. So that's where I'll start, at the end. Matt Murdock is taking on a dozen Russian mobsters in a hallway who have kidnapped a little boy, simply to get to Matt. And it is possibly the best action sequence you will see in a long time. I might even go so far as to say I don't think any of the recent blockbusters would be able to top it. The use of a continuous tracking shot was inspired, and really works as a way of allowing the viewer to feel a part of it, like a bystander.

Surely the logistics that went into this scene were a nightmare?! Taking place entirely in one corridor, the whole thing looks really good in one continuous take and given that they only had one day to record it with two days rehearsal, not a lot of time when you are doing other things, it was a miracle that those involved managed to pull it off. It is the type of scene that might be nominated for an emmy, if the Emmys, general snobbery would bugger off concerning any science-fiction or fantasy show which isn't on HBO.

It is far too often that we see the heroes of these shows overcoming serious injury and beating the odds to save the day. We can see it, but we don't always believe it. Their quick recoveries are too unbelievable, but here, I believed it. And more importantly, I really felt it. Matt enters this fight in bad shape, broken ribs, cuts, bruises and a concussion are just a few things which threaten to topple him over. Throughout the fight he is stumbling around and falling over himself, bumping into walls or struggling to stand up. And it is made really clear that in the end, there is nothing he would liked more than to drop dead. But then we are forced to remember that Matt's real power isn't his enhanced senses, but his stubbornness and determination that won't allow him to quit no matter how much her wants to or needs to.

In fact, if this episode was just made up of that scene, I would have probably still enjoyed it. Luckily though, there was still a lot more going on. Something I really liked was how the opening episode spent its time setting Matt up as some kickass fighter, this episode opens with him lying in a dumpster, just having had his ass handed to him! I think it is rare for a superhero show to allow their heroes to be this vulnerable this early on. But it works, normally something like that is the mid-season cliff-hanger. Not so here.

For those of you who don't know, the title of this episode refers to someone who patches up boxers in the middle of a match. This is something we see in the flashbacks to Matt's childhood, while a character called Claire does this for Matt, after she finds him in her dumpster. And it looks like the show is going to set Claire up as Matt's confident, the Alfred to his Batman. She is there to patch him up and participate in rooftop torture scenes. This was the only part of the episode that made me feel uncomfortable. The moment objects head towards eyes, I flinch and look away. But what is cool is that Claire looks to be an amalgamation of two different characters from the comics, Claire Temple, former wife of Luke Cage, who also has his own series, and Night Nurse, a cool character who patches up street level heroes who wouldn't be able to afford the medical care that someone like Tony Stark could. It is shame that Marvel didn't include Daredevil in the recent Civil War movie, it would have been nice to see Night Nurse helping Captain America's team.

The other thing I was wary of in this episode was the storyline with Matt's father, simply because the heroes having dead parents have become one of the worst clichés in comic book history. It is something we have seen time and again, from Bruce Wayne's parents being shot in a back-alley, to Peter Parker losing Uncle Ben. Sometimes these characters seem to only exist so that the hero has some motivation behind putting on the mask and fighting crime. But Daredevil didn't make that mistake and I quickly came to find myself liking 'Battlin' Jack Murdock!'. And I'm not going to try and deny it but I did find his story very sad, I was close to tears in the end. By the point Jack looks around at the crowd cheering his name, I had pretty much lost it. It was also a surprise that co-creator and writer, Drew Goddard had to leave the series. I guess the ball in now in DeKnight's court...