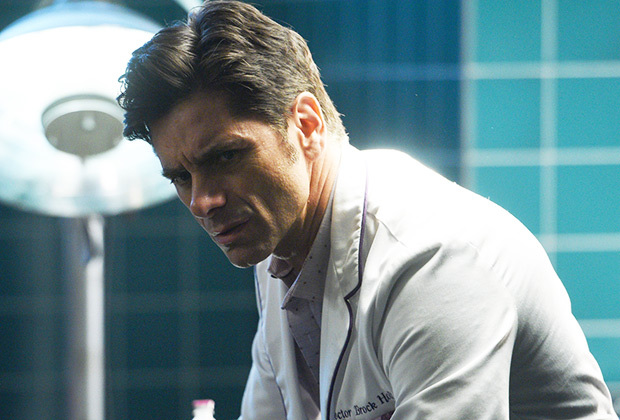 The secret is out! Cassidy Cascade is the Green Meanie! And so is Nurse Awful. And a third unidentified person who probably does emerge from the swamp. And then there is Munsch with her cannibal disease she got from eating brain pudding. Could the CURE institute be flat-lining soon?

The one suspect hasn't committed a crime, Dr. Brock. And his dodgy hand. His hand does have killer urges from its previous owners and stress is what triggers its deadly tendency's. It has no brain but acts like an object which is possessed. Brock can't bury this evil however and its previous owner's voice can somehow manage to echo through his head with an evil laugh. It slaps hum awake at night at forces him to watch boring television programmes at 3AM.

One of the best moments of this episode is when the hand saves Brock from the Green Meanie with some sort of kung-fu superpowers. The Meanie cowers and runs away into the green light of the hospital corridors. The hand certainly does deserve its own comic book series now! By Brock can barely keep it at bay, especially when he fails to stop it from holding a knife to Chanel's throat on a date.

Cassidy Cascade is surrounded by death and Chanel #3 diagnoses him with an illness that has convinced him he is dead. He is almost the grim reaper. Chanel #3 has also realised that he is the killer. It isn't until the end of the episode that she finds out there is more than one. But Cascade isn't as dead as he thinks. He shows us glimmers of remorse despite being the monster and tries to appease the vengeful Nurse Awful. Awful wants her killer persona to obliterate all the Chanel's which Cascade wants to protect #3, no doubt this will bring the Green Meanies into a fight against one another at some point. And now that Cascade and Hoffle have revealed to us their secret, then who is the third killer? We've already heard the thoughts of Brock, who is determined to help people even with one killer hand. And there is Hester, who keeping what seems like a vault of secrets inside her.

I don't know how Brock managed to perform a delicate surgery with just hand and chainsaw but it showed what a good doctor he is. To everyone else, the hand and Brock is still a major suspect. But to us, we know he isn't the killer. It would be far too easy otherwise. And when on Scream Queens has anything ever been easy...