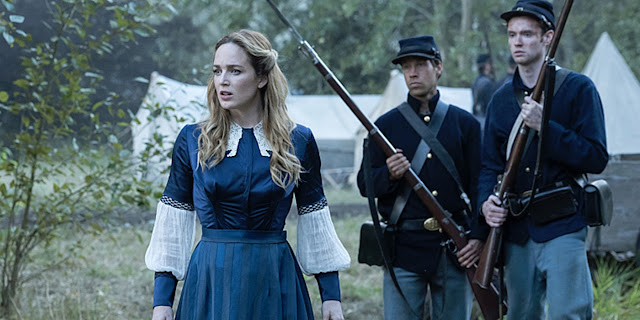 Other than the Christmas episodes which feature in every show to come from The CW, it is odd to see them do episodes which focus on other holidays. It was nice to see Legends of Tomorrow, breaking away from tradition and giving us a zombie-focused episode which worked as a belated Halloween treat. It combined zombies with the Civil War and was a recipe for success.

The Legends made Mississippi in 1863, their latest stop, responding to an apparent rescue mission. Of course, the mission goes haywire and it becomes clear that a time pirate has crashed and accidentally unleased a deadly zombie plague on the nearby Confederate Army.

The twist serves as the catalyst for a really enjoyable episode which features three major plot points and makes use of each member of the team. We have Sara and Nate venturing out to warn Ulysses S. Grant, played by John Churchill, about the impending zombie apocalypse. We have Jax and Amaya going undercover to steal vital plans and ensure the victory of the Union. And we have Ray and Stein finding themselves trapped in their own horror movie as Mick falls victim to the zombie plague!

This split narrative approach works well, particularly because it prevents the team from using their powers to get through the zombie threat. On a good day, zombies would be of little concern to the group but Jax and Stein, two halves of Firestorm, getting separated and Ray's ATOM suit having been destroyed, the odds weren't in their favour anymore. This was really true with Nate and Sara who find themselves trapped in the classic zombie scenario. Dwindling supplies and a seemingly endless horde of the undead charging in from all directions.

The storyline between Nate and Sara is a lot of fun, with a brilliant balance between zombie carnage and two characters bickering over whose more qualified to take the lead. Nate has really stepped into the void left by Rip in more ways than one. I wasn't too enamoured with the portrayal of General Grant, though. It wasn't so much of a casting problem as it was the character which was a little too bland for me. After the brilliant take on Albert Einstein earlier in the season, it would have been brilliant to see more personality quirks which would have allowed Churchill to have more fun with his role.

But what this episode really did was allow us to see the real dark side of the American Civil War as Jax and Amaya come face to face with the horrors of slavery. We've see Jax facing casual racism of bygone eras before and sometimes, as with the Nazi-occupied Paris setting, it can be played for laughs. But in this episode, both he and Amaya bore witness to the very worst of humanity. And it leaves an impression on them both. This episode also deals with the thornier side of time-travel. As heroes, they have a duty to act when they see injustice no matter what the circumstances. But does the need to protect the timeline outweigh that of people suffering? It was unsettling to watch Jax reluctantly allowing a slave to be tortured rather than blow his cover. Luckily, this show draws a pretty firm line between good an evil and he eventually decides that saving lives is always worth the risk. And the fact that this allows for a stronger bond between Jax and Amaya wasn't a bad thing either.

With the dark storyline for Jax and Amaya, it was nice to see the Ray, Stein and Mick subplot adding some levity to the picture. Mick as a zombie was fun to watch as was Stein's terrified reaction to the twist. Who would have thought that a man of science would have had such a crippling phobia of the undead. And as this storyline plays out, it is nice to explore Ray's newfound sense of inadequacy now that his ATOM suit has been destroyed. Of course, the obvious solution would be to have him steal some tech from the future and build himself a new suit. And the thought of him becoming the new Captain Cold was interesting.

Abominations was an entertaining episode which showed the show's willingness to venture into darker and more dramatic territory when it is necessary. But it didn't add anything to the show's overall larger plot. It is a little bizarre that the show started off with a real sense of momentum and then abandons this in a way which allows them all to goof off in different points of history. I don't understand why no one is interested in returning to 1942 and trying to solve the mystery of Rex Tyler's murder! I wonder how many more historical trips the Legends will have to take before they find their real calling again...