Doctor Who: The Age of Steel Review 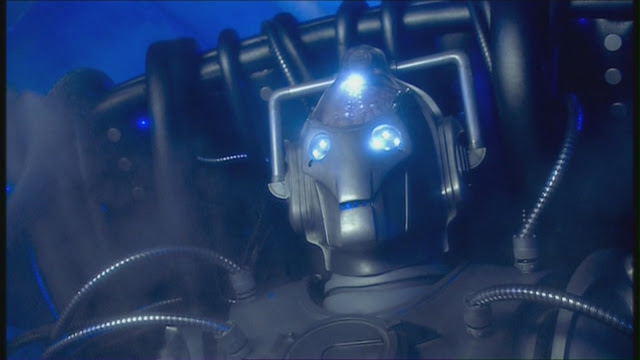 The Age of Steel is the follow up episode in the two part story that sees the return of the Cybermen, one of Doctor Who's deadliest alien races. The Doctor and his friends have to combat the Cybermen and stop John Lumic in this action packed adventure!

We know that John Lumic's ultimate goal is to convert the entire population of London in Cybermen in a misguided effort to give everyone immortality. By sending out an order through everyone's EarPod's, Lumic manages to make everyone walk into the nearest conversion centers to submit for 'upgrading'.

A particular highlight is how Mickey gets to have the spotlight and saves the day. As usual, the Doctor forgets Mickey is even there and doesn't include him in his plans to stop the Cybermen. But Mickey refuses to pushed aside and offers to help. Tagging along with a member of the resistance called Jake, they take out the transmitter hidden in Lumic's airship stopping people from voluntarily submitting to the Cybermen. It is nice that all the supporting characters get their own moments to shine but Mickey saving the day and then deciding to stay behind on this parallel world felt like the careful culmination of exposition that has crossed across many episodes. When Mickey's counterpart, Ricky, is killed by the Cybermen, Mickey feels the need to take his place. After so many episodes of him tagging along behind Rose, it was nice to see him finally step up and find a purpose.

Also exciting to watch was the Cybermen storyline. While it turned into a bit of a disappointment following a by the book approach on how to do an action episode. Rose is given a few moments with her father and the duo attempt to rescue Jackie before she is converted. It is sad to see that they are too late to save her and at the end, Pete distances himself from Rose proving the Doctor's original point that he isn't really her father.

When the Doctor and his gang finally meet John Lumic, who the Cybermen force to be upgraded to the role of CyberController, they spend far too long discussing the merits of humanity and emotions. The main problem with this scene is they don't say anything we haven't heard on countless other science fiction shows. What was interesting however was how the Doctor used a CCTV camera to give Mickey the emotion override code that can be used to finally destroy the Cybermen. With the code inputted into the computer, the Cybermen all self destruct when they see what they have become and the whole control center starts to blow up.

Mickey rescues, the Doctor, Rose and Pete from the exploding building using Lumic's airship. When asked how he learnt to pilot it, he responds he spent a lot of time on his PlayStation. It was a great scene and the definite turning point for his character. His emotional goodbye was a classy send off. While Mickey returned later in the series, it was a great way to handle his departure from the TARDIS.

This episode wasn't as good as the first part but there is some impressive action to keep our attention. It doesn't quite deliver as it should have done as there are far too many scenes which feature ideas we've seen in other science fiction shows and movies. While it wasn't brilliant, it was the perfect episode to bid farewell, at least for the time being, to Mickey...