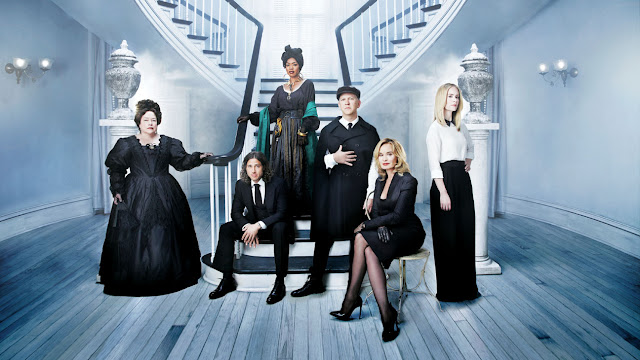 The show's creators, Ryan Murphy and Brad Falchuk are often presented as serial narratives but what is unfortunately obvious is that these two are not storytellers. And they are not button pushing provocateurs despite all their shows deal with issues within society and delight in courting with controversy. Each of their shows have a different feel to them and they cook up bright and flashy set pieces to match that tone. There is nothing that these two have ever said in public that displays them necessarily as great thinkers as they appear to work on instinct without a proper coherent plan. And because of this it is no wonder that nearly all of their shows tend to be messy. Unfortunately it is American Horror Story which often proves to be the biggest mess of all as it promises it is a delivery system for big statements about what horror truly means in America. Or perhaps it could be a metaphor sometimes for the horror of America...

Never more is that mess evident than in the third series entitled Coven. In setting the main bulk of the action among a coven of witches and throwing in a long standing battle between an immortal, sadistic, racist slave owner from before the Civil War, played by Kathy Bates, and a voodoo queen, played by Angela Bassett, Coven focuses on issues of race and the persecution of women through a playing with fire fashion. Never in this series is it clear if the creators have anything to say about race and because they appear to being more reckless here, the results feel more exciting than they should do in a carefully executed, liberal message drama that is easy enough to read without having to watch too deep into the show.

In fact, Coven is at its most entertaining when it flirts with mocking those sorts of well meaning message shows. Most of the comedy comes from the character of Queenie, played by Gabourey Sidibe, who attempts to deprogram the racist torturer and former slave owner, Madame LaLaurie, by forcing her to watch Roots. And this sendup of The Clockwork Orange works exactly in the way that it is supposed to with LaLaurie finally moved to tears and she renounces her cruel and bigoted past. But because her heart is twisted more than we thought, she eventually reverts to her old ways and returns to her former home where she disappoints tourists who want to hear all the lurid stories of how she treated her slaves in her attic where the real life version of LaLaurie used to torture any slaves who disappointed her or made the slightest of mistakes. Honestly, the 1880s seems like another world by todays standards. She tells the tourists that she was a brilliant hostess to high-society soirees and she was renowned for her tireless charity work. This is a very sharp and welcome satire of the literal whitewashing of the American past, where the people from the South were genteel aristocrats who complemented each other on their table manners as the Yankee aggressors came pouring over the hills. It is a bit of a shame though, that for the most part Murphy and Falchuk have better and more sophisticated views on pop culture than they do about human cruelty.

But if Coven is about anything it is about how to remain looking fabulous. Or like a fabulous dame. The main bulk of the plot is taken up in members of the coven looking for who will be the next supreme to take the place of the current dying supreme, Fiona, played by Jessica Lange. It is unfortunate that the younger witches don't appear to be very important in the grand scheme of things. And while the camera feasts of the youthful looks of Taissa Farmiga and her co-star, Emma Roberts but they don't have the same seasoning of experience that their been-through-hell high quality of their elders. Actresses, Jessica Lange and Frances Conroy are both not just major actresses within the profession but divas, fashion icons and really plausible candidates for the president of a gay-pride march. Kathy Bates has these qualities too, it is just a shame that the writers had no idea what they were going to with her character.

I suppose in the end the show cares about style much more than it does the idea of morality. When voodoo deity Papa Legba, played with enthusiasm from Lance Riddick who is clearly having a blast, sends LaLaurie to hell, he itemizes all the things that separate her from the evil goddess on top of the hill. He is extremely careful to include her crimes against passion and fashion along with, apparently minor league stuff like murder and torture. But then again, I guess murder is easy enough to shrug off on a show like this where each character gets killed and brought back to life more than enough times.

When Coven was originally broadcast on television there were people who took to the internet to complain that the show is meant to be about women, black people and the living dead rising up and taking power back from their oppressors but instead it seems to settle for being about a small bunch of minorities doing battle with each other rather than focusing their attentions on those who have oppressed them for so long. Here both Murphy and Falchuck seem past the point of putting in hard work to give us anything resembling a plot. It becomes apparent very early on that they would rather spend time with minor characters who amuse only them and there is little time given to those who have oppressed them because the oppressors lack any flair.

And this is the first series of American Horror Story not to feature a tragically frustrated same-sex relationship which also demonstrates the point that the writers had grown to lazy to approach the topics of real passion and romantic longing. Instead, the sexual relationships on display here are between Fiona and a resurrected serial killer, played by Danny Huston and between Farmiga's character and a Frankenstein's monster like-frat boy, played by Evan Peters. Both these male characters reflect the bemused wonder over the eternal question of what heterosexual men are good for. And both these characters declare themselves the 'guard dogs' of women who are perfectly capable of taking care of themselves because their witches for god sake!

So, while the energetic rush and shock effects that are featured in American Horror Story can be exciting, Coven settles for style and the quest for the knowledge on how to remain fabulous, where it should have settled for substance and really interesting storyline.