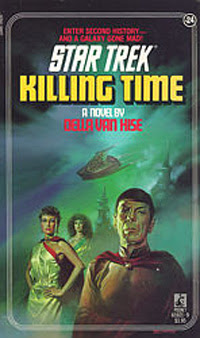 The plot surrounding Killing Time focuses around an attempt by the Romulans to alter the Earth's history so that they can prevent the creation of the Federation. I suppose the plot does share a similar kind of plot as the rebooted film franchise from 2009. But unlike the film, sadly Killing Time is entirely forgettable.

I think in many ways the reason why Killing Time suffers is because it was published way too early. In the printed page, the events which lead to the creation of the United Federation of Planets took place several places after this novel was originally released. And The Next Generation had stated that the Federation had been formed in 2161, not 2097 which is the year this novel is set in. And despite having been well established in the lore of Star Trek by this point, the time-travel which features heavily in this novel is shaky at best as well as highly inconsistent with what had gone before.

The main plot point, like it is in many a Star Trek time-travel tale, is what also doesn't help the book by being hyperspace, rather than warp, somehow stops the Enterprise from being really, really affected by the change in the timeline. The only reason the Enterprise was effected at all was because it was at impulse at the time the Terminator-esque Romulan agents went back in time and killed a couple of people.
And Star Fleet clearly have a lot of ships, many of which would have been at warp at the time of the incident, so why did they never come into play?

But what the novel does well is show the changes in our characters subtly. Spock is now captain of the Enterprise which is now named the ShiKhar. Chekov, normally an ensign is now First Officer and Captain Kirk is now an ensign. Uhura, Doctor McCoy, Scotty, Nurse Chapel and Sulu all remain the same however. But Sulu, Uhura and Scotty barely get any time in this book, so I guess it is alright that they went unaltered.

And then there are the two Romulan women, the Praetor and Sarela. Sarela is easily the most interesting of the two characters but is unfairly side-lined after setting up the plot for the rest of the book, despite her character calling for more screen time.

This was a book which was ruined for me by the premise. Time-travel has always been an uneasy beast within the Star Trek mythos. When it is done right we get masterpieces like The City on the Edge of Forever. But when it is done wrong it can end up like Killing Time...