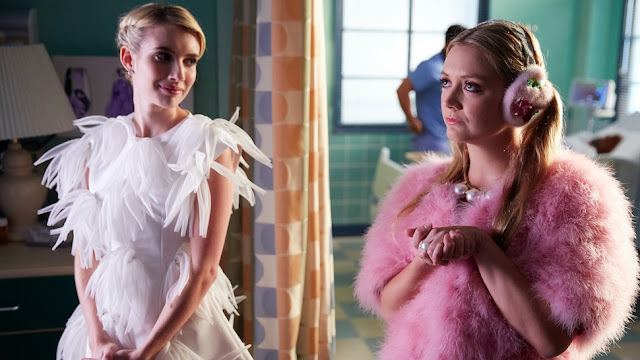 Finally, after weeks of being off air, Scream Queens is back! Breaking in America for the world series and the presidential election, everyone is now in the need of some good fake horror to indulge in. The last episode saw Chanel #5 get attacked while Denise Hemphill was left for dead via electrocution. And then there was Hester, who escaped her cell and who could possibly be aiding the Green Meanie in it's revenge killings.

With Denise, an FBI agent, dead and #5 being a pain about her stab wound, Munsch finds herself with no other choice but to go to the police, when really all she wants to do is dump Denise's body in the swamp behind the hospital but ends up changing her mind after a whole room of patients are massacred on the same night. And her illness is gradually getting worse, so she has no choice but to use Denise's body to try out a new cryogenic chamber she purchased with the money left to her institute after Chad died.

Everyone was so convinced that the hospital was going to close, but two weeks later, business is suddenly booming, the building full of people with strange diseases. It turns out there really is no such thing as bad press! We meet a woman who is really tall and a girl who can't move her face. But favourite patient in this week's episode was the lady who couldn't maintain her accent every time she spoke. Chanel also sees a solution to their current problem, with the numbers of Chanel's down to 3, she decides to get more to use a canon fodder against the serial killer.

She begins her plan by recruiting the tall woman and the girl who can't move her face as well as their biggest fan, the creepy Tristan. Hester decides to scare Chanel but as a psychotic killer herself, she maybe the best defence Chanel has against the new killer. And Zayday discovers that Chamberlain, a hospital worker she had befriended had never been hired by Munsch and that someone filed a missing person's report, 30 years ago, after the disappearance of her husband at the hospital. Chanel decides to throw a sleepover at the hosptail for the new recruits. I'm sure you can guess how that turned out!

Finally Scream Queens is back, I loved the narration featuring Munsch picking everyone apart. And those scenes with the foreign accent syndrome scenes were laugh-out-loud funny. Also I don't find Kirstie Alley funny but her meltdown at the end was a classic!